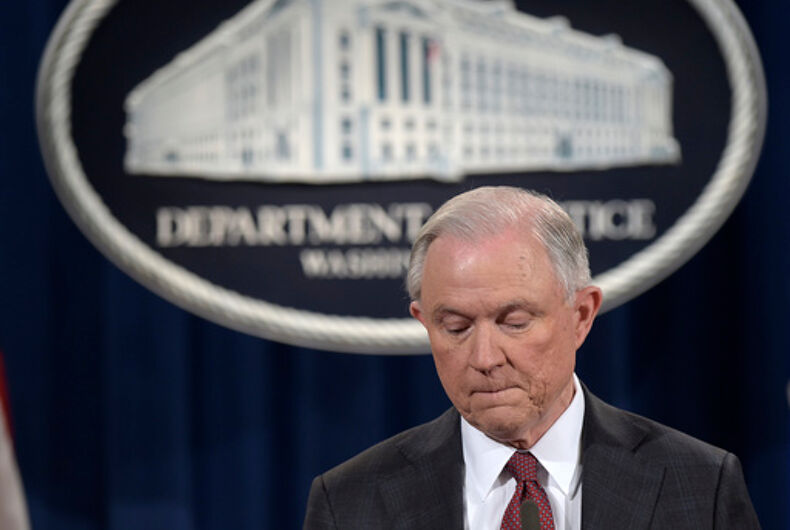 Donald Trump wants nothing more than to fire Attorney General Jeff Sessions, at least judging by the president’s tweets.

Sessions committed the cardinal sin of behaving like an attorney general and not the mob lawyer Trump wants to protect him from the Russia investigation. For a man who prizes loyalty above all else, Session’s refusal to protect Trump from the rule of law has enraged the president.

Trump has signaled that Sessions will be gone after the midterm elections (although contrary to his Apprentice persona, Trump is a coward and will probably hide behind Twitter to do it).

There are two problems with that approach.

No one wants the job. And the Senate probably won’t confirm anyone Trump would pick.

Even if Republicans hold onto the Senate after November, the odds that Trump could get a personal lackey to take Sessions place are low.

For one, Senate Republicans are saying that whoever Trump would choose would have to commit to protecting special counsel Robert Mueller’s investigation into Russia’s role in the 2016 campaign. Trump has made it clear that he wants that investigation shut down and faults Sessions for recusing himself because of his role in the campaign.

In a sign that his fellow Republicans simply don’t trust their party leader, GOP senators are suggesting that only someone from their own ranks would garner enough votes to win confirmation. Or in the words of Sen. Lindsey Graham: “somebody from the body or someone who has had experience … or somebody you know personally, you know what you’re getting.”

The other issue for Trump is that, while the senators agree that the someone should be a senator, all the likely candidates say, no thanks. Graham, John Cornyn and Mike Lee all demurred when Politico asked them about their interest in the position.

And that’s assuming Republicans control the Senate. If Democrats take over, then no one Trump would nominate would likely stand a chance.

All the while Trump has been sniping at Sessions, the attorney general has been diligently turning his hardline conservative views into government policy.

He has reversed Justice Department policy protecting transgender workers, put LGBTQ asylum seekers at risk of death and thrown the force of the government behind religious freedom (aka, the right to discriminate).

With two more years at his disposal, there’s no telling the additional damage that Sessions could cause.

Of course, the Republican stand against Trump may not last long.

When it comes to actually standing up to the president, GOP senators always cave. The same may happen with a replacement for Sessions.

Just last month, Graham was saying that Sessions had to go so that he could be replaced with someone “that has the confidence of the president.”

Sessions is proof, however, that confidence from the president is a fleeting thing.

“He is a world-class legal mind and considered a truly great Attorney General and U.S. Attorney in the state of Alabama,” Trump said when he picked Sessions to be attorney general.

He added, “Jeff is greatly admired by legal scholars and virtually everyone who knows him.”

No doubt Trump would still be saying the same, if only Sessions was willing to put Trump above the law.

Intersex care is now available in a guide for providers. Finally.