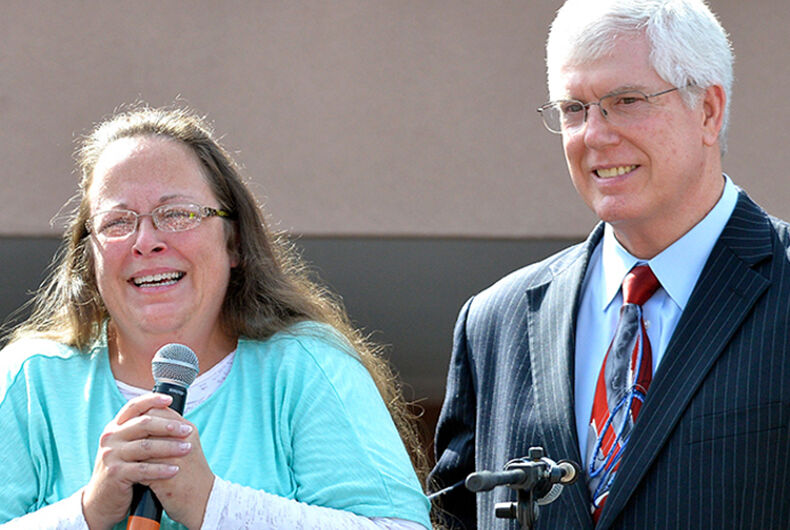 When David Ermold and his now-husband were denied a marriage license in 2015, they didn’t take it lightly. The men sued and when county clerk Kim Davis continued to deny the two a license despite a court ruling in the men’s favor, she ended up cooling her heels in the local jail for a few days for refusing to follow the law.

After things had cooled down, Davis announced she was changing her party affiliation from Democrat to Republican.

So when Ermold announced he would run against Davis to be the Rowan County clerk, people around the nation contributed money to his campaign and wished him well. Ermold was handily defeated in the primary by fellow Democrat Elwood Caudill Jr.

Now Ermold is alleging Caudill is a worse candidate than Davis and he hopes his former nemesis wins the race. He says that Caudill is also homophobic and uses anti-gay slurs while courting LGBTQ voters.

“I just want him to lose. I would rather Kim Davis win,” Ermold told the Associated Press. “At least Kim Davis has the integrity to stand up for what she believes in. Elwood Caudill is a liar.”

Still, Ermold isn’t willing to actually vote for Davis and he’s definitely not a supporter. But he’s not willing to cast a ballot for Caudill either.

“Caudill is self-admittedly personal friends with Davis,” Ermold wrote in a Facebook post after the AP story published. “He courted the Davis vote during the primary, and now he expects the liberal part of the county to roll over on their backs for him.”

“I have more conviction than to ask that of those that supported my campaign. I’m sorry if you expected me to flip on a dime, but you were mistaken. Don’t forget, Kim Davis initially ran as a Democrat here in Rowan County, and the local Democratic party still has not embraced the LGBTQ community publicly.”

“Local Democratic leaders and candidates in other local races were afraid to take pictures with me at my own events during the primary because they didn’t want it to be construed that they supported the gay candidate,” he continued. “It was repeatedly done, and it was eye opening and disappointing.”

Ermold has repeatedly posted allegations on social media that Caudill has used anti-LGBTQ slurs and urging others not to vote for him. For his part, Caudill has also taken to Facebook to defend himself against the charges.

“[M]y primary opponent David Ermold–and some of those affiliated with his campaign–have berated me, lied about me, and falsely accused me of being prejudiced simply because I wouldn’t respond to their tactics the way they wanted me to in regard to the issue of LGBTQ+ rights,” Caudill wrote.

“When I say I will faithfully execute the job of Rowan County Clerk and serve all citizens equally. Of course that means LGBTQ+ citizens. I support every American’s right to ‘life, liberty, and the pursuit of happiness,’ afforded them under the laws of our nation, and I do not believe our government should discriminate against anyone for being who they are.”

“I want to reiterate that there has never been a question in my mind that I will fulfill my responsibilities to issue marriage licenses to those legally seeking them without any prejudice,” Caudill continued, “and I believe I have made that unequivocally clear.”

A church responds with love to anti-gay vandalism