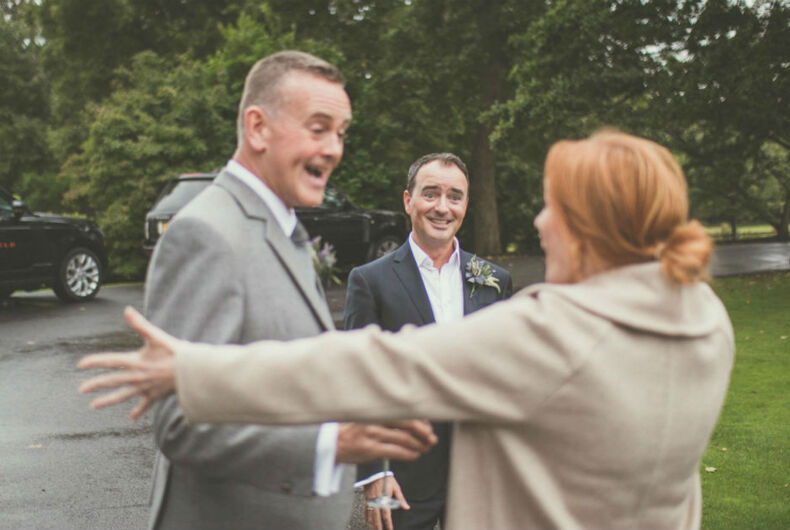 JK Rowling left these adorable Scottish newlyweds flustered after popping in unexpectedly on their big day. You might say she photobombed their magical moment. And you might also say that made it even more perfect.

The Harry Potter mastermind was reportedly minding her own wizardly business while having lunch in Edinburgh when she spotted the newly minted married couple. Nick and John were busy posing for their wedding portraits when their lives changed forever.

Photographer Matt Fothergill of Matt.E.Photography was lucky he had his camera out and ready to go or he would’ve missed the sweet satisfaction of capturing the three of them on film. Fothergill told Deadline News that his clients were so excited at meeting one of their icons on their big day they were “bleeping like Beaker from the Muppets.”

Fothergill further recalled, “So we had the absolute pleasure of shooting with the super lovely John and Nick – legends in their own right – at the always elegant Prestonfield House in Edinburgh for this gorgeous wee wedding. Despite unpromising weather, spirits were extremely high and rightly so.”

And then the kicker.

“And then JK Rowling dropped into their couples session for a quick pose! Total f******* legend. I wish I could say we were cool about it,” he said. “Not even slightly. I think she got about 20 feet before we all started screaming like big kids.”

While the newlyweds were dressed to the nines, JK opted for jeans and ankle boots at the 5-star hotel Prestonfield House.

The 53-year-old author and ally to the LGBTQ community sported red hair and a gigantic grin as she embraced the pair.

Nick and John were married “surrounded by an intimate group of family and friends they tied the knot in a warm, funny, beautiful humanist ceremony by local legend Caroline Pearson of the Humanist Society Scotland Ceremonies,” Fothergill wrote on his Facebook page.

Admit it soon-to-be-wed Potterheads, you’re green as a Slytherin’s Quidditch robes after Harry Potter author @j.krowlingoffical photobombed a couple at their Edinburgh wedding! ⚡️⚡️ . . . Nick and John were posing for wedding photographs at @prestonfieldhouseedinburgh when they bumped into the word famous writer who was at the venue having some lunch, where she agreed to pose for a few photos – how lucky is that? Almost as if one of boys had a quick swig of luck potion Felix Felicis before the big day! 🧙🏻‍♂️ . . . Photo by @mattephotography1

Posted by Matt.E.Photography on Wednesday, August 29, 2018

Black, Hispanic & Asian people are more likely than Caucasians to identify as LGBTQ