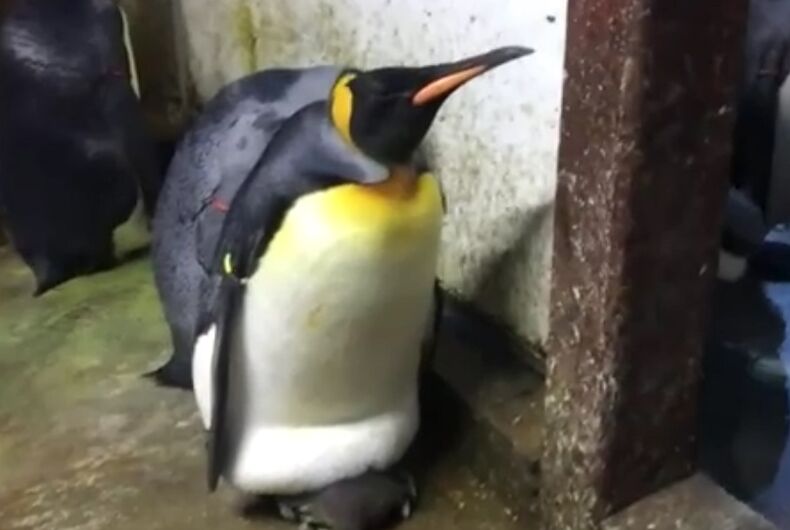 A couple of male penguins in a Danish zoo stole a chick from a straight couple that was doing a bad job at parents.

Zookeepers say that the drama unfolded at the Odense Zoo earlier this week when a female with a child went to get her bath. Because she was gone, the father was supposed to care for the kid.

But he left the chick, and that’s when the gay penguin couple grabbed it.

“I think the female went out to get her bath, and then it has been the male’s turn to care for the kid,” said zookeeper Sandie Hedegård Munck. “He may have left it, and that couple thought, ‘It’s a pity, we’ll take it.'”

Munck said that the male didn’t even act like his chick was kidnapped. Instead, he was “strutting around the facility,” acting like he never had a child.

The female looked around a little, but she wasn’t too persistent. Munck said that was surprising, since the female was aggressive if humans got too close to her chick.

But the straight penguins eventually heard their chick’s peeps and went to demand it back. Munck had to step in between the two couples to stop the penguin drama and return the child to its parents.

The gay couple did get a chick to raise from a single mom who wasn’t able to squat on the egg, now that Munck knew that they were interested in caring for one.

“The males do not have any kids, because they do not lay eggs. So it’s a great exercise for them to care for this chick. They are helpful. Now, if a male forgets to take care of an egg, we can always give it to that couple.”

Comedian Daniel Sloss recently appeared on Conan O’Brien’s show and did an entire hilarious monologue on animal sexuality that includes a bit on gay penguins.

Watch our friend Daniel Sloss take a seat on the #CONAN couch for the first time tonight @ 11/10c on TBS Network.