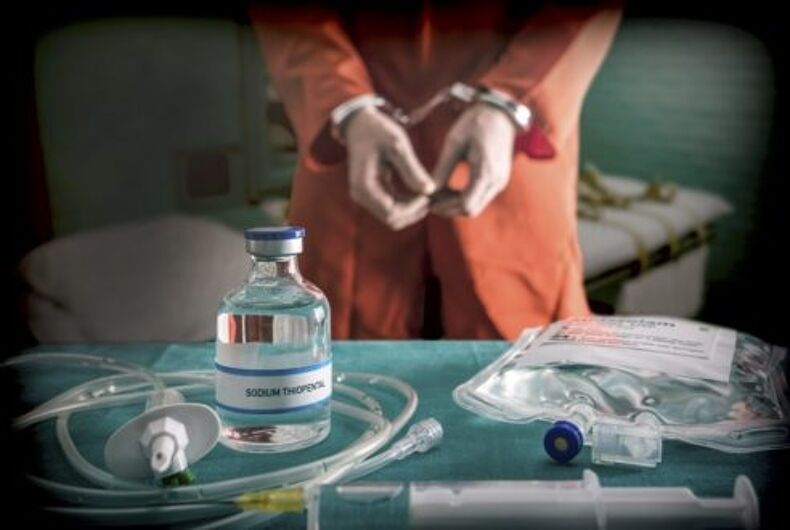 A divided three-judge panel of the Eighth Circuit Court of Appeals yesterday refused to hear the appeal of Charles Rhines, a gay man on death row in South Dakota, who argued that he should be allowed to present new evidence showing that anti-gay bias may have motivated the jury to sentence him to death.

Several jurors came forward saying that other jurors were making comments about Rhines’s sexuality. One juror recalled that there was “a lot of disgust” during deliberations about how Rhines was gay.

Another said that a juror said that Rhines wouldn’t mind life in prison. “It was not a joke,” she said.

A juror recalled someone saying, “if he’s gay, we’d be sending him where he wants to go,” referring to life in prison.

Six civil rights organizations, including the American Civil Liberties Union, American Civil Liberties Union of South Dakota, Lambda Legal, GLBTQ Legal Advocates & Defenders, National Center for Lesbian Rights, and National LGBT Bar Association, filed a friend-of-the-court brief in August following the discovery of comments from jurors suggesting that sentencing Rhines to life in prison with other men would be “sending him where he wants to go.”

The brief provided information about the long and painful history of discrimination against lesbian, gay, and bisexual people in the United States and asked the court to issues a certificate of appealability to Rhines to allow him to present evidence of juror bias.

“There is compelling new evidence that some of the jurors who sentenced Charles Rhines to death in South Dakota were motivated by anti-gay bias. Statements from three jurors show that the jury sentenced Mr. Rhines to death because some thought that, as a gay man, he would enjoy life in prison with other men,” Rhines’ attorney, Shawn Nolan, said.

“The U.S. Supreme Court’s decision in 2017, Peña-Rodriguez v. Colorado, applies to Mr. Rhines’s case and requires that a court review his evidence of anti-gay bias before his execution can proceed,” Nolan added.

“Anti-gay stereotypes and animus should have no role in our criminal justice system and certainly should never be a reason to impose a death sentence. We are gratified that one of the judges on the panel, Judge Kelly, voted to review this important issue,” he added.

Mar added, “We appreciate that Judge Kelly voted to consider Mr. Rhines’s  petition for the opportunity to show whether his death sentence was the result of anti-gay bias.”

Ethan Rice, Lambda Legal Fair Courts Project attorney, said, “Mr. Rhines’s case represents one of the most extreme forms anti-LGBT bias can take. Evidence suggests that he has been on death row for the past 25 years because he is a gay man.”

Rice added, “We are deeply disappointed that the court has chosen not to allow for review of this case when it is clear that Mr. Rhines may have been denied the constitutional right to a fair trial because the jury deliberations included bias.”

Today, the federal government and 28 states do not have laws that expressly prohibit discrimination based on sexual orientation, leaving lesbian, gay, and bisexual people at risk for discrimination in jobs, housing, education, credit, health care, jury service, retail stores, and other aspects of public life.

In 2017, 46 percent of LGBTQ employees reported remaining closeted at work and 2016 was the deadliest year on record for hate crimes against the LGBTQ community with more than 1,000 incidents of hate violence reported.

Additional information regarding the case can be found in the amicus brief filed by the six organizations on August 2, 2018.

These drag queens said ‘Yes to the Dress’ Vegas-style