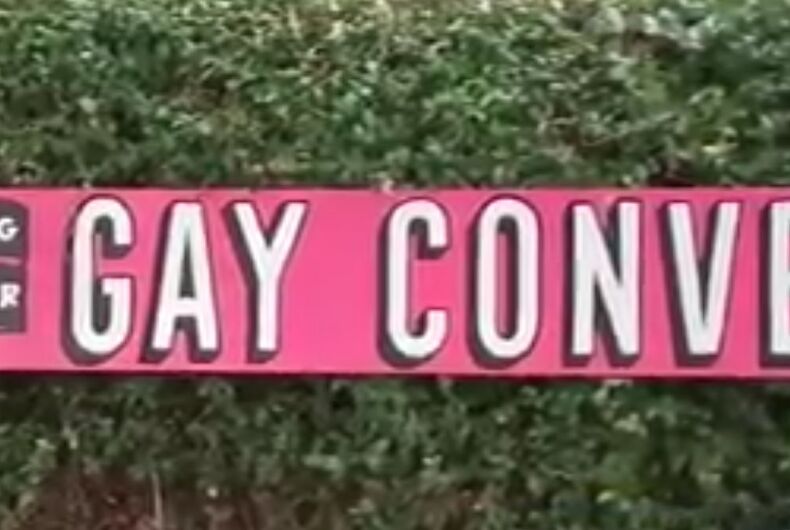 An art dealer in Texas has found a funny way of dealing with a parking dispute with a church.

Hiram Butler owns an art gallery in Houston, and in 2015 the River Pointe Church bought a building just across the street.

Ever since then, Butler has tried to get church-goers to stop parking in the four spaces that belong to his gallery.

“They’ve had events, and they’ve continued to occupy all the parking spaces” on both sides of the street, Butler said.

So he decided to put up a large sign in front of the gallery’s parking spaces that says “Parking Only for Gay Conversion Therapy.”

Souvenir bumper stickers he made say: “Follow me to the Blossom Gay Conversion Therapy Center, where we pray away the straight.”

He worked with artist Robert Rosenberg in developing the sign, and they say it has gotten a response.

“I like to think of alternative solutions to problems that embarrass people and force them into behaving better,” Roseberg said. “Apparently, it has bothered the people across the street which it was meant to. I’m a provocateur.”

Butler said that he doesn’t want to have the cars towed away, calling that too “aggressive.”

“We are sorry to have inconvenienced Mr. Butler because we want to be the best neighbors possible. We host a Bible study across the street from Mr. Butler’s property, in our private residence, and will continue to be diligent to prevent our guests from using Mr. Butler’s four parking spaces.”

Butler said that the sign, which is listed on his gallery’s site as an exhibition, would stay up for two more months.

This candidate said she supports LGBTQ rights. Then she told Chinese media the opposite.