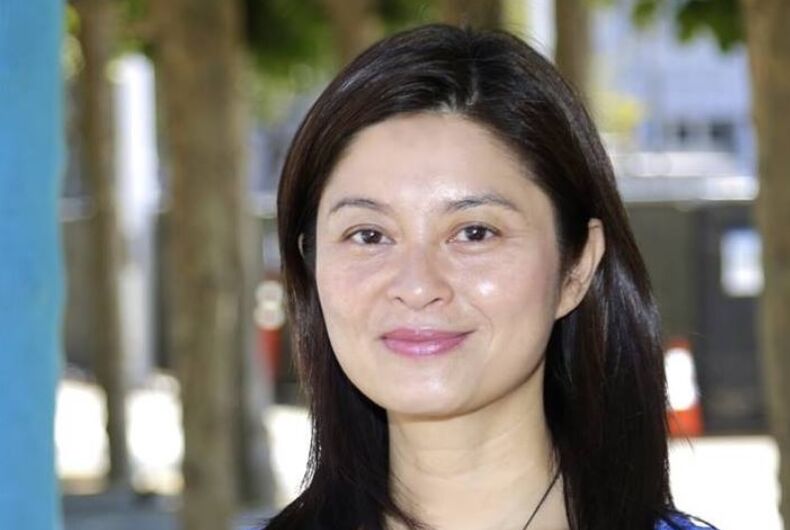 Photo: Facebook/Josephine Zhao for School Board 2018

Josephine Zhao is a local activist in San Francisco, and in 2013 she ran for school board. That year, she came under fire for her opposition to legislation that banned discrimination against transgender students and forced school to allow trans students to use the appropriate bathroom.

Zhao called the law “evil legislation,” said that trans students will “rape” other students, and appeared at a press conference for an SPLC designated hate group that was working against the legislation.

She has since apologized repeatedly. In a 2016 column she wrote, “I am an ally for the Transgender Community and have been an advocate in the Chinese American community on the importance of understanding and respect for the LGBT community. I always work to bridge the gap in the cultural differences between the Chinese community and our larger society.”

And just this past week, she reiterated her change of heart. “I was a recent citizen then,” she said, referring to the 2013 activism.

“Someone took me to a press conference. I only knew one person there. I apologize I got sucked into it.”

Zhao is running again this year for school board. She has gotten endorsements from some big names in the local Democratic Party, including Mayor London Breed.

On her website, Zhao linked a column about her evolution on transgender issues, discussing how she helped her daughter’s best friend’s family accept his transition, and on Twitter she posted an image of her family at San Francisco Pride.

It turns out that she may not have evolved as much as she has claimed.

Mission Local found some messages she wrote on WeChat, a popular platform used by the Chinese-language community in San Francisco.

In an August 29 message, she denounced a local LGBTQ organization, the Harvey Milk LGBTQ Democratic Club and even bragged about how her anti-LGBTQ stances have helped her in the election.

In a later message, she was more direct. She said there are “two transgender candidates… fighting for the title of ‘first transgender commissioner’… There are also three homosexuals. Their highest priority for education would be to spread ideologies.”

She also referred to Supervisor Sandra Lee Fewer as “Chinese trash” and a “race traitor.”

“It is unfortunate that she would stoop to using a term created by white supremacists and used by the KKK,” Fewer said in response to Zhao’s comments.

Several days later, the San Francisco Examiner found other messages on WeChat where Zhao bragged about lying to English-language media.

“This time I learned some tactics,” Zhao said in comments that the Examiner had translated.

Referring to a questionnaire in which she said she supported gender-neutral bathrooms, she wrote, “I filled out the questionnaire casually in order to deal with external people. My principles remain in my heart.”

She also took back her apology. “I only apologized for the misunderstanding of their legislation and am not supporting gender-neutral bathrooms.”

In another WeChat message, she took a page from Donald Trump’s playbook and said that anyone who calls her out on her transphobia is really insulting all of her supporters.

If Josephine Zhao, a new citizen, can be persecuted and labeled as a hater for things she said, then all of you, all immigrants, all of the outsiders who haven’t been politically educated in San Francisco, will become a plague. Let alone election campaigns, in the future because we are politically incorrect, we would not be able to work in schools or government. We are collectively being wronged, are you going to stand by and watch, or are you going to come out and fight? It’s time to stand together with Josephine and defend our community. Please vote for Josephine Zhao on November 6th, use your votes to fight for justice!

“First, I want to make it crystal clear: I support all gender bathrooms. I support the rights of transgender people, as I support all people,” she wrote.

She blamed the issue on context and bad translation. “My opponents are attempting to exploit two things: the meanings and contexts that get confused in translation between Chinese and English; and the confusion among many in my community between ‘all gender’ restrooms and ‘communal’ restrooms,” she wrote.

Zhao is a landlord in San Francisco and she spent years working against rent control laws. In 2012, her nonprofit urged supporters to vote only for Republicans, including then-candidate Mitt Romney.

She now says that she supports a state effort to allow local governments to pass rent control laws.

A gay art dealer & a church got into a parking dispute. His response is hilarious.