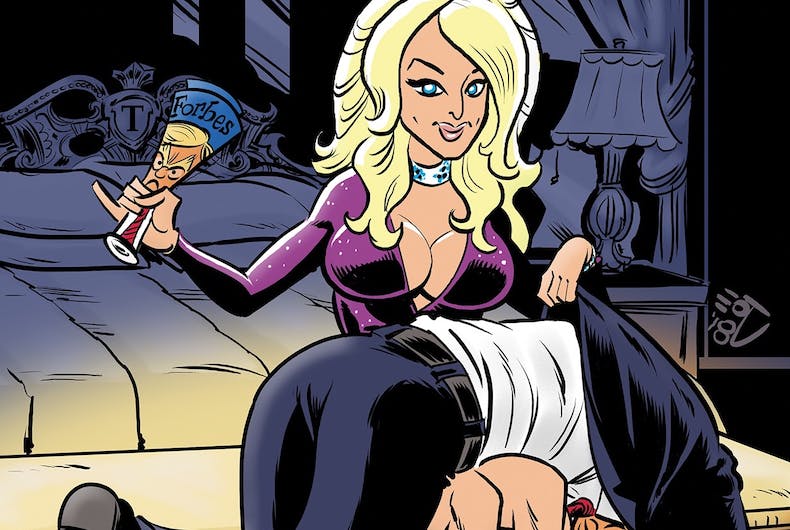 There’s a new comic featuring adult film star Stormy Daniels and with Trump’s limited reading ability, maybe this will be one book he can finish.

Political Power: Stormy Daniels is a 24-page profile of the woman who may destroy the Trump presidency faster than Robert Mueller. The book is available digitally and there are two collectible covers and a hardcover version available on Amazon.

Paradise shared with LGBTQ Nation his inspiration for inking the comic.

“I didn’t know much about Stormy Daniels going into this project but as an 80s kid from a family of New Yorkers I’ve been hearing about Donald Trump my entire life,” Paradise said. “He was always showing up on TV, he was on the radio with Stern all the time, you couldn’t escape the guy. In the years between he had become a bit of a joke in NYC, but back then he was extremely popular. Kids wanted to grow up and be just like Donald Trump and one of the main reasons was Trump constantly surrounded himself with gorgeous women.”

“Why on earth is Donald Trump, of all people, trying to hide an extramarital affair?” he asked.

Political Power: Stormy Daniels is published by TidalWave Productions. The company has a series of biographical comics – including ones for Hillary Clinton and Donald Trump.

Check out the three covers and a couple of panels below. Sadly, since it’s biographical, Stormy doesn’t come with any X-Men superpowers, but she does come equipped with one big ability: She can stomp toadstools and trolls into the dust.