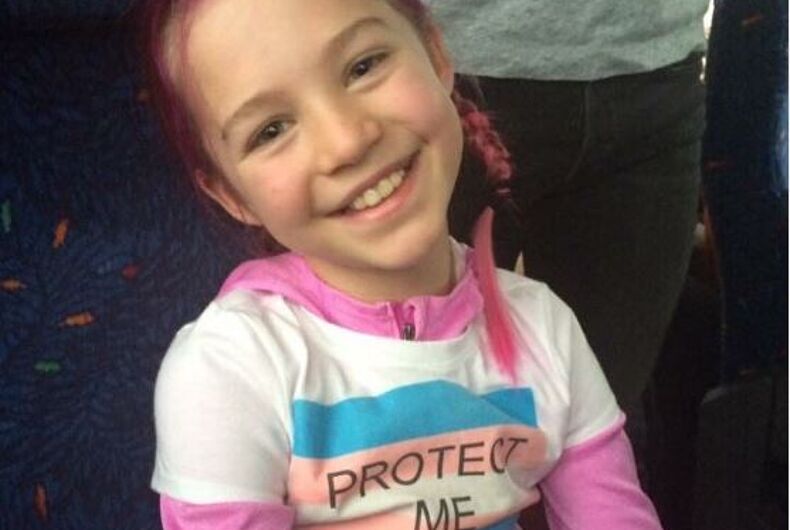 10 year old Rebekah had the best sign at a rally to protest Trump’s rollback of transgender rights. Her mother said that Rebekah has a lot of support from her community and school.Photo: Jamie Bruesehoff on Twitter

The bill passed the state senate last week and several amendments were approved by the Assembly, so the bill now goes to the governor to be signed into law.

AB 2119 was introduced by Assemblymember Todd Gloria (D), who is gay.

Related: Conversion therapy bill dies at the hand of gay politician in California

“The passage of AB 2119 today is a momentous sign of hope for transgender foster youth living in the system growing up feeling neglected, forgotten, or out of place,” he said in a statement.

“AB 2119 will empower transgender foster youth to live authentically and simply be themselves. Governor Brown now has the power to make that a reality.”

“Transgender and gender nonconforming youth are significantly over-represented in California’s foster care system,” the ACLU of Northern California said in a statement.

“Unfortunately, some personnel, caregivers, and providers harbor biases and misinformation that jeopardize the health of these young people…. AB 2119 will make clear that, to meet this obligation for [transgender and gender nonconforming] youth, child welfare agencies must ensure access to clinicians who provide gender-affirming treatment, consistent with established standards of care.”

A black transgender woman was found dead in Louisiana