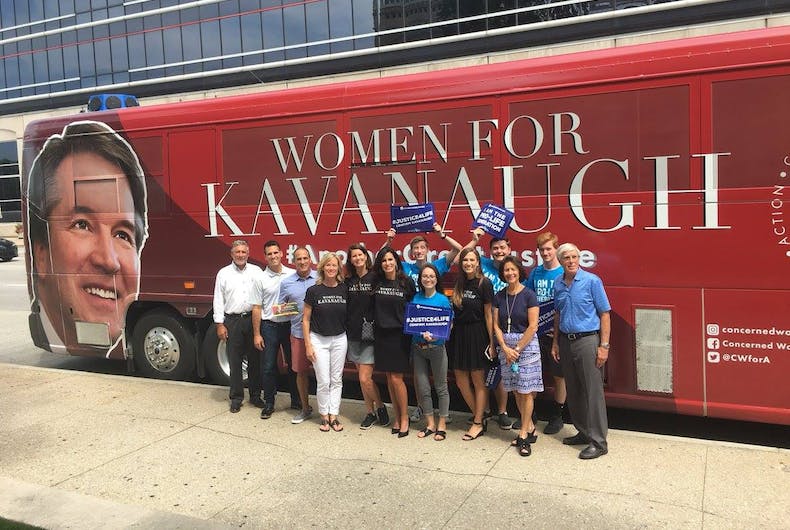 Over half of the "concerned women for America" supporting Supreme Court nominee Brett Kavanaugh are actually... men.Photo: Facebook

The Concerned Women for America are in the same league as the One Million Moms group. While they both purport to be for religious women, they’re actually front groups for conservative men to speak out on women’s issues.

Particularly when those issues are harmful to actual women.

Now CFA has a new “Women for Kavanaugh” initiative to support Supreme Court nominee Brett Kavanaugh after he’s been accused of attempted rape. Because, of course they have. They’re even posting photos of themselves grinning in front of a bus plastered with Kavanaugh’s face.

There are six women standing in front of that bus. But there are seven men. Maybe the Concerned “Women” for America should lighten up on attacking gender nonconforming people, eh?

In real life support for the nominee is tanking quickly according to recent polling. Leading the way in that decline? Women.

While men split 41% to 33% in favor of Kavanaugh, his support among women was a lot lower; 28% favor the nomination and 42% oppose it. College-educated women are particularly against his nomination; 49% of them oppose putting Kavanaugh on the bench, while 28% support it.

These female campaign managers are shaking up Capitol Hill