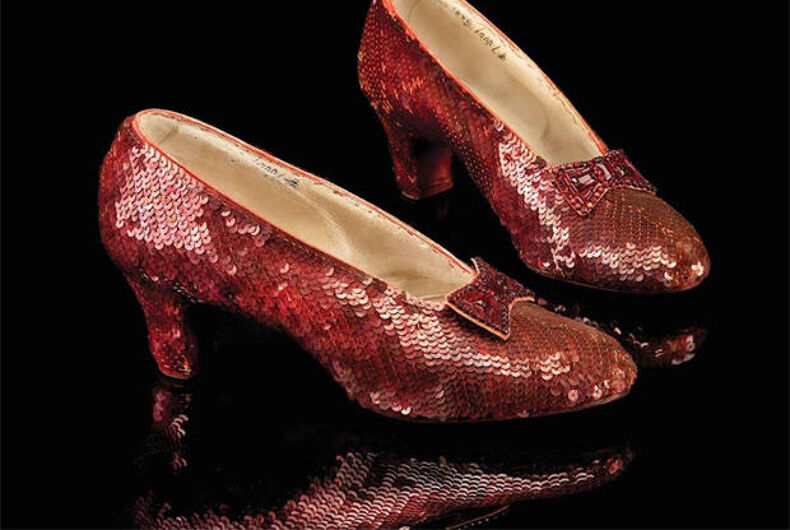 The Grand Rapids Police Department and the FBI announced this week that the ruby slippers worn by Judy Garland in The Wizard of Oz had been recovered after they were stolen 13 years ago.

In 2005, the shoes were on display in the Judy Garland Museum in Grand Rapids, Michigan, Garland’s home town.

Early one August morning, someone broke a window and entered the museum. They smashed the plexiglas case where the slippers were being displayed and ran off with them, leaving one red sequin behind.

No fingerprints were left behind and the alarm did not sound.

Ever since then, there were rumors about what happened to the shoes – like that they were thrown into the Mississippi River – but investigators quietly pursued leads.

Last summer, someone approached them with a tip that led police to Minneapolis. Since that was out of state, the Grand Rapids Police Department contact the FBI and the shoes were recovered last month in a sting operation.

“When the slippers were snatched in that early morning burglary, the thief not only took the slippers but also a piece of history that will be forever connected to Grand Rapids and one of our city’s most famous children,” Grand Rapids Police Chief Scott Johnson said in a statement.

Police say they have multiple suspects but are still looking for more information before making an arrest.

The shoes were actually one of three pairs used when shooting The Wizard of Oz. The Smithsonian’s Museum of American History has another pair, and police worked with them to authenticate the pair that was just found.

In 2015, the executive director of the Judy Garland Museum, John Kelsch, said that the shoes may be worth between $2 and $3 million, although they’re insured for $1 million.

Good news: Scott Lively lost his governor’s race. Bad news: He got a third of the vote.