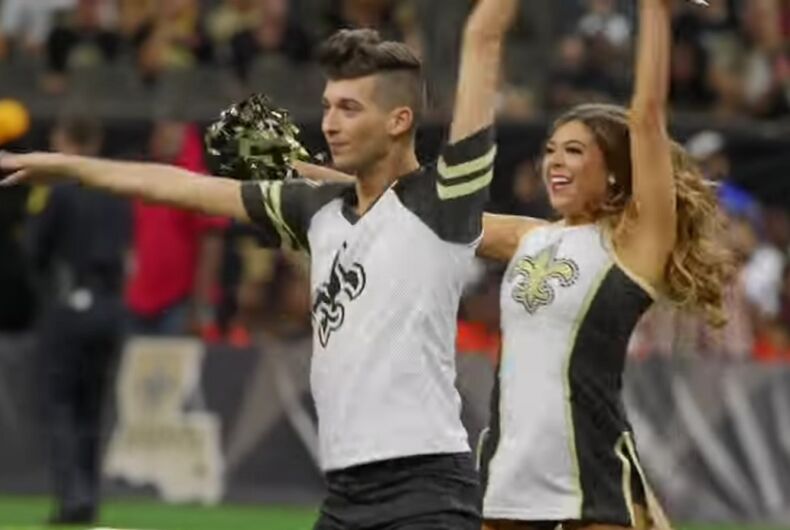 One of the NFL’s first male cheerleaders made his debut this weekend.

Performing with New Orleans’ Saintsations at a preseason game against the Arizona Cardinals, Jesse Hernandez, 25, made his first public performance as a cheerleader.

Hernandez wore black jeans and a Saints T-shirt as he danced with his fellow Saintsations. He also carried a small, white towel instead of pom-poms.

The Times-Picayune reported that the preseason crowd either didn’t notice Hernandez or didn’t much care. A woman who didn’t notice him until he was pointed out by a reporter said, “If he can dance and perform, I don’t care.”

His mother Tracey said that he has endured bullying ever since he became the first boy on his high school dance team.

“Those people just need to get over it,” she said.

“We’re in 2018. Things shouldn’t be just for men or just for women. If you have the ability to do it, you should be able to do it.”

This past March, Quinton Peron and Napoleon Jinnies were accepted to the Los Angeles Rams’ cheerleading squad. Shortly after, in April, Hernandez made the New Orleans Saints’ squad.

In the 19th and early 20th century, cheerleading was an all-male activity at Ivy league colleges, and male cheerleaders were not unheard of at co-ed schools.

NFL cheerleaders, though, have been women since teams started hiring professional squads, according to NFL.com. In 1972, the Dallas Cowboys’ owner Tex Schramm wanted his cheerleading squad to be less about team spirit and more about turning heterosexual male fans on, so the squad wore revealing outfits and weight gain was banned.

“We wanted everyone to look at them and say, ‘Now they are ladies,'” said the squad’s director at the time.

Several NFL teams in the past few years have had stuntmen perform with the squads, but their role was distinct from that of the cheerleaders’.