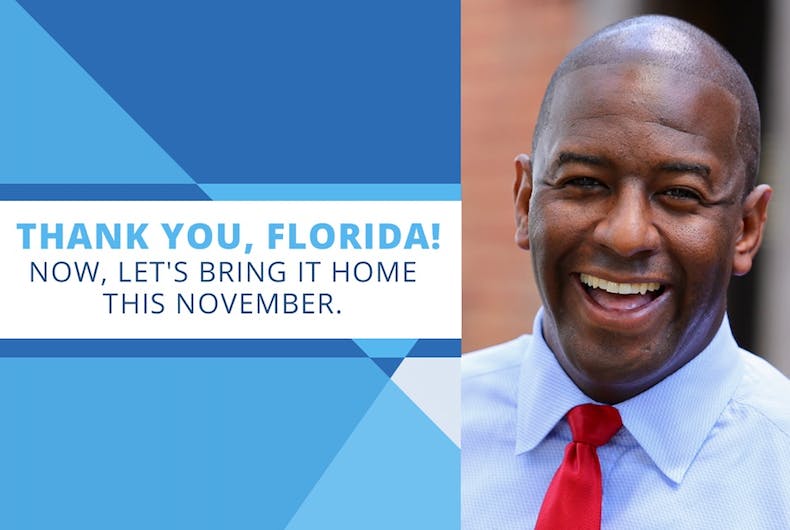 Andrew Gillum is motivating Democratic voters, thanks to an assist from the presidentPhoto: Andrew Gillum's Facebook page

Donald Trump loves to hit the campaign trail and bask in the adoration of his fans. Occasionally, he even pauses from a recitation of his greatness to mention the candidate he’s ostensibly campaigning for.

A key ingredient in his recipe is a rehearsal of white grievances, from kneeling (mostly black) NFL players to the “low IQ”(and also black) Rep. Maxine Waters. All of this to get voters fired up and ready to contribute to their party’s victory in the fall.

Trump’s gambit is working. For Democrats.

In the latest sign that all of Trump’s dogwhistles work as much against him as for him, Andrew Gillum, the Tallahassee mayor who won the Democratic gubernatorial nomination last Tuesday, raked in $1 million the following day and another $1 million the day after that.

Gillum got a nice boost from Trump, who labeled him “a failed Socialist Mayor…who has allowed crime & many other problems to flourish in his city.”

Gillum’s Republican opponent, Ron DeSantis, contributed his fair share as well. He charged that Gillum would “monkey up” the state if elected, blissfully tone deaf to the implications of the phrase when applied to the black mayor.

Gillum was quick to note that the language was “a page direct from the campaign manual” for Trump.

It’s not just the money flowing into Gillum’s coffers that are buoying him. He owes his upset victory to a coalition of African-American and millennial voters, the very ones who don’t show up for midterm elections, let alone primaries.

That could pay even bigger dividends for the Democrats in November as they wage an uphill battle to win control of the Senate. Incumbent Bill Nelson is locked in a tight race against Rick Scott, who is stepping down as governor and is willing to sink tons of his wealth into the campaign.

If Gillum can deliver the same level of turnout in November as he did in the primary, Nelson will benefit from Democrats who will vote the party line.

Of course, it’s no surprise that Republicans are during their best to suppress that turnout by introducing all kinds of voter restrictions under the guise of combatting ballot box fraud that is virtually nonexistent. But Trump may prove the undoing of that effort. He motivates people to vote, alright. Just not for him.