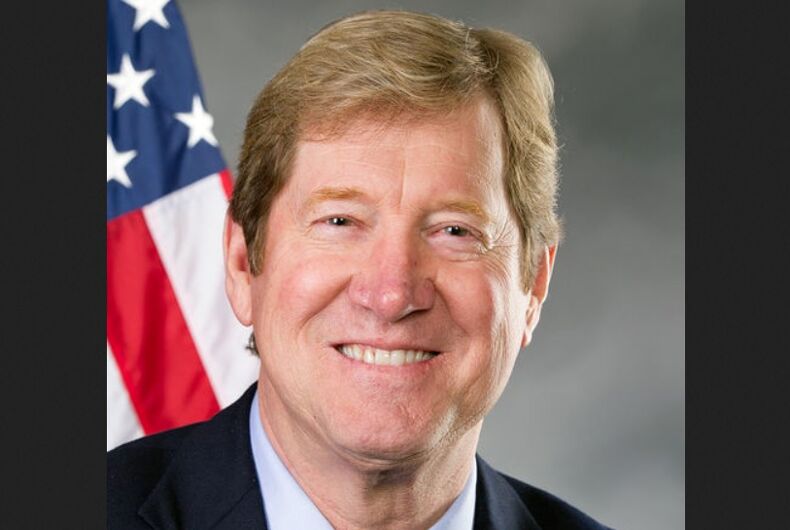 A Republican running for re-election in the U.S. House is coming under fire for comments he made comparing LGBTQ people to rapists and marriage equality to committing a crime.

Representative Jason Lewis (R-MN) has been in Congress since the last election. Before he was in Congress, the ultra-conservative hosted a syndicated radio show, The Jason Lewis Show.

On a 2013 show, Lewis was discussing the Equal Protection Clause of the 14th Amendment… badly. He was saying that it doesn’t mean that everyone has to be treated equally under the law.

While it’s true that the 14th Amendment doesn’t require the government to treat everyone the same all the time, the issue isn’t “similar circumstances,” which would legalize all forms of discrimination.

The courts, instead, are supposed to determine whether the government has a good reason to discriminate. And two years after Lewis’s broadcast, the Supreme Court decided in Obergefell that there wasn’t a good enough justification for prohibiting same-sex couples from marrying.

“I’ll probably get in trouble for this, but I’m still not convinced that it’s a great idea for children to grow up with two moms or two dads,” he said.

“Call me a Neanderthal, I’m not saying it’s bad, I don’t know, there hasn’t been some longitudinal long-term studies on this but we’ve rushed to this judgment that growing up with two mommies is a wonderful experience. I don’t know, maybe it’s not so wonderful. Maybe it could harm the kid.”

There actually have been quite a few studies on the matter, and children raised by same-sex parents do just fine.

This past July, audio of Lewis complaining about how he can’t call women “slut” anymore surfaced.