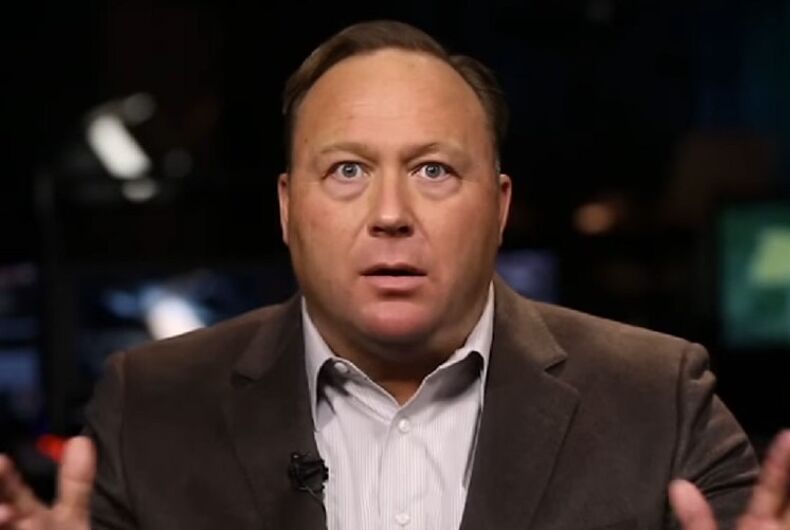 Alex Jones, conspiracy theorist turned media mogul, is currently fighting two simultaneous court cases for defamation with a third on the way, but it hasn’t stopped him from spewing nonsense on his Infowars outlets.

While his lawyers were literally arguing in front of a judge that Jones should be protected as a journalist who was simply wrong and that his listeners know he’s not a real journalist and just giving his opinion, Jones was on air, well, tossing out more red meat for his gullible followers.

This time, he’s back to his claim that former President Barack Obama is secretly gay – and he’s oddly specific about it too. He also regularly insists that Michelle Obama is transgender and drag queens are demons, so, you know… Journalism.

“I learned this with Pizzagate and stuff. You’ve got admissions and thousands of emails about the kids will be delivered into the hot tub for your pleasure and then it’s the FBI code words for sex with kids off their own homeland security manual and they’re talking about $65,000 of succulent hot dogs. “Oh God, these are good. I had these hot dogs in Hawaii and they were delivered by jet.” It’s male prostitutes,” he said.

“And look, Obama’s having sex with 10 dudes a day, whatever. The point is is that that’s what’s going on on your taxpayer time. He’s not watching SportsCenter three hours a day up there, OK? OK? And the report is he’s got — I’m not going to get into it on a family show — but let’s just say Amtrak isn’t just a train. So, I’m not even — all I’m getting at here is I noticed this penchant for going with the rumor or the secondhand or something without total proof instead of ignoring all the real stuff.”

“Pizzagate” is the far right conspiracy theory that progressive leaders are running a secret child molesting ring that spurred a gunman to open fire in a DC restaurant. Jones pushed the story heavily, but later retracted his statements and apologized. Apparently it didn’t stick.

A cis woman got banned from a gym for insulting a trans woman. She thinks she’s the victim.