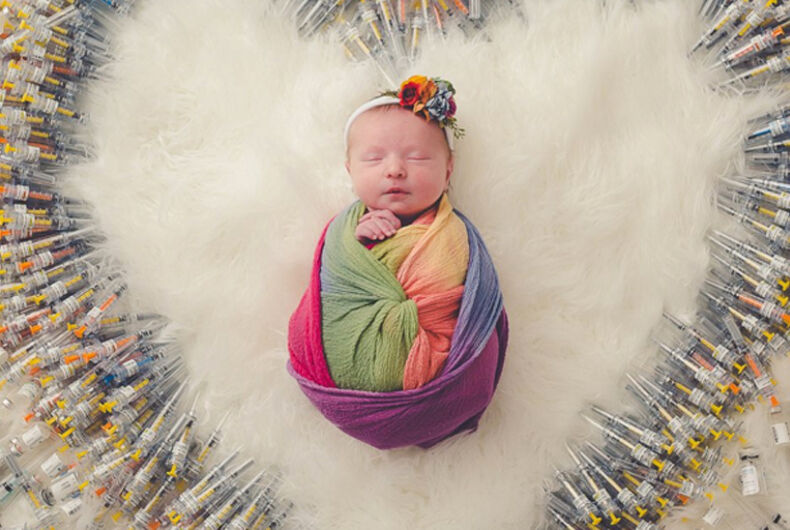 After four years of struggles, Patricia and Kimberly O’Neill celebrated with an unusual photo of their newborn daughter, London.

Wrapped up in rainbow-hued fabric, their sleeping daughter is central to the image, surrounded by 1,616 IVF needles that were a constant part of the couple’s attempt to have the child.

When the parents sought out a photographer, they wished to include the needles as a testament to the work that went into conceiving.

“This is the first time I have been asked to do a photo like this! I was honored and wanted to create something special,” said Samantha Packer of Packer Family Photography on their Facebook page, presenting the photo.

The O’Neill’s set out four years ago to have a baby, only to suffer s series of painful setbacks, with seven attempts to conceive and three miscarriages along the way.

It was after the second miscarriage that the couple learned that Patricia had a blood-clotting condition that was affecting her ability to carry a child, leading to two daily injections of blood thinning medication along with the typical IVF shots.

Kimberley saved every needle that Patricia was injected with.

The couple asked their photographer to incorporate the needles into the photo of their daughter, but gave the photographer free reign on the layout. She chose the use a heart motif to express the love the couple share, in spite of the pain they faced along the way.

The photo struck a chord with the parents, causing them both to tear up as they saw it for the first time.

“It was really special because when they walked into the room and saw it all laid out, they got really emotional,” their photographer told People magazine. “that’s what I love to do as a photographer is create something special for my clients that they really are gonna treasure.”

“It was amazing to see them all laid out,” said Patricia. “To look at them all and go, ‘Man, I was able to do that. I was able to get through that.'”

Many others feel the image is amazing, too: the photo has received more than 88,000 likes and 65,000 shares since if was first posted on Facebook.

This is the first time I have been asked to do a photo like this! I was honored and wanted to create something…

Photo used with permission of the family.

The religious right may leave social media, but can they reach their base via carrier pigeon?