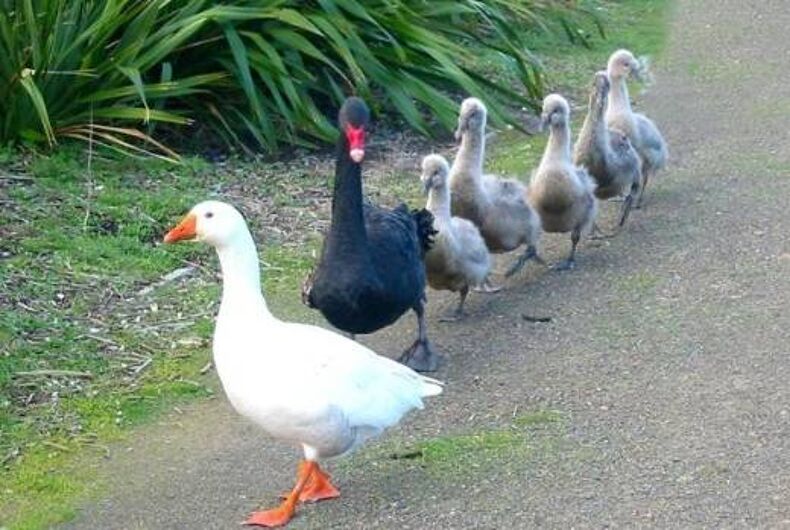 Thomas the goose and Henry the swan with their babies.Photo: Wellington Bird Rehabilitation Trust

While they were alive, Thomas and Henry were a thoroughly modern New Zealand couple.

Together for 30 years, Thomas, a white goose, and Henry, a black swan, had a special same-sex interspecies relationship. After about 18 years together, they opened up their relationship to Henrietta, a female swan, making a sweet thrupple.

Henry fell for Henrietta’s charms first, but Thomas soon came around and together the thrupple raised 68 cygnets over the next decade until Henry’s death in 2009.

Henrietta, the home-breaking hussy, flew off with another swan. Thomas was heartbroken and had to be removed to a bird sanctuary. Other swans kept attacking and bullying the poor bereft goose without Henry around to protect him.

Waikanae Bird Tour operator Mik Peryer told The Dominion Post, “There’s a love story there but it also goes across the boundaries and brings in the gay relationship which I think was wonderful.”

When Thomas died in 2017, the town had what mayor K Gurunathan called the “most bizarrely memorable” funeral they remember. Dozens of people attended – including a priest who performed the funeral.

“Complete with bagpipes, speeches and a poetry recitation by that famous raconteur, Pinky Agnew. The only funeral I have attended in my mayoral chains,” Gurunathan told the outlet. “The story of this funeral went global.”

Now locals want to build a statue to the birds as a symbol of diversity and love. An artist has already supplied a drawing for the monument and residents are trying to decide whether the city should pay for it or not.

“That would involve responsibility for the artistic nature of the work and its placement going to the council’s Art Panel. If they are happy with that, that’s fine,” the mayor said. “Otherwise they can look to crowdfunding the project. I think Thomas has the pull to raise that kind of money. ”

“No matter the process, Thomas is a great and quirky Kāpiti story and we should be celebrating our stories through our art.”

Does the GOP have a racist cut-off point?