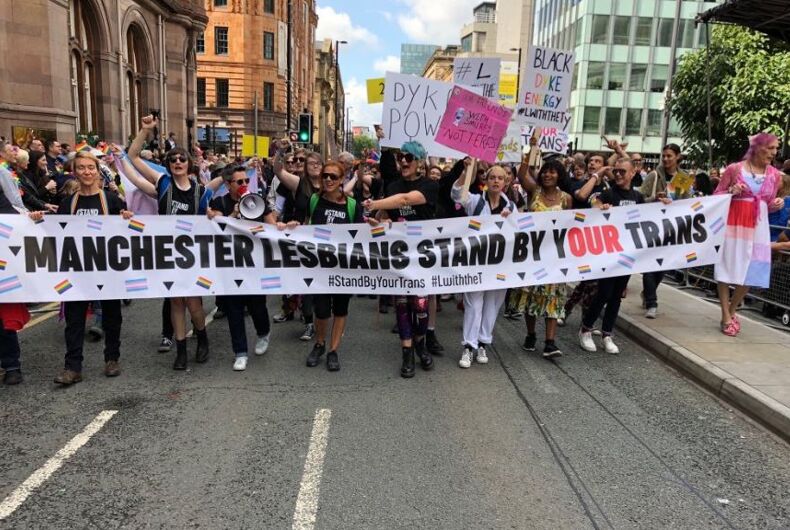 Editor’s note: This article has been changed to clarify that the group was a welcomed part of the pride parade and not protesters.

A group calling themselves L With The T stood prominently at the start of the 2018 Manchester Pride Parade today. The newly formed group brought lesbians and trans people together in a way that was both inspiring and promising for the LGBTQ community there – and around the globe.

The show of unity was especially important because the act came just seven weeks after a group of trans-exclusionary radical feminists (TERFs) blocked the start of Pride in London.

Eight lesbians marched with a banner in London that read, “Transactivism erases lesbians” – and they did so without proper approval or accreditation.

One disgruntled parade-goer shouted at the Manchester group, “A man who says he’s a lesbian is a rapist,” but otherwise reports said it was a peaceful protest and march.

Louise Wallwein was the organizer. She discussed the event with Gay Star News.

“We live in a very divided world at the moment,” she said. “The last thing we need as a community is to be divided. We need to sit down and talk to one another with love. Only love conquers hate.”

She poignantly noted, “The trans community have fought for equality alone. It’s time as a community that we stand by our trans.”

These pictures of Manchester Pride prove that love is still very much alive in Manchester.

First day down, three more to go for the @ManchesterPride Big Weekend! A little rain won't stop anyone enjoying the Bank Holiday with #Pride 🏳️‍🌈, in fact it only helps make more rainbows 🌈 #ManchesterPride2018 pic.twitter.com/e5qfv883G0

We hope that everyone celebrating Manchester #Pride this weekend has an incredible time. Be safe, have fun and be kind to one another! We cannot get enough of this colourful installation in @Spinningfields to mark the occasion 🤩🌈🌈 #ManchesterPride2018 pic.twitter.com/mDBdqJk4fN