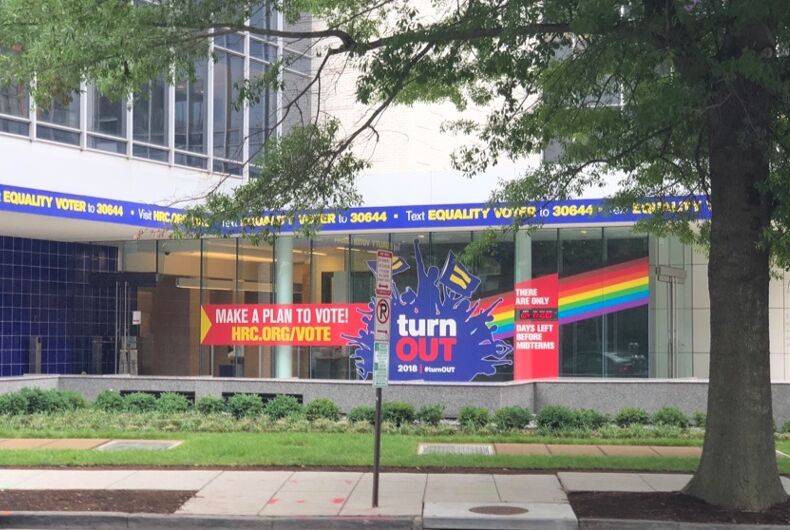 The front entrance of the Human Rights Campaign's DC headquarters now includes a rainbow flag window cling. The flag is a recent version with brown and black stripes.Photo: Bil Browning

The Human Rights Campaign has installed a rainbow flag window cling at their new DC headquarters. The flag is a recent version with brown and black stripes added to be more inclusive of people of color.

First adopted by the city of Philadelphia, the updated flag has proven controversial, but other queer organizations around the world have now announced they will use the updated version.

A request for comment from HRC on why they chose to use the new version of the flag was not returned.

“Symbols are about meaning and aesthetics. The rainbow flag is by definition inclusive and always has been,” trans activist Rebecca Juro wrote in an op-ed for LGBTQ Nation when the updated flag was unveiled.

“Its brightly colored stripes already have specific meanings, and none of them have anything to do with race. Taken as a whole, it’s well-known what the rainbow flag means and that it represents the entire LGBT community.”

The pride flag was the brainchild of Gilbert Baker, who created the iconic design in 1978. The flag initially had a total of eight stripes, each one symbolizing an aspect of the movement. These included hot pink for sex, red for life, orange for healing, yellow for sunlight, green for nature, turquoise for magic and art, indigo for serenity, and violet for spirit.

One of those initial colors proved to be difficult: the hot pink. When moves were made to have the flag mass produced via the now-defunct Paramount Flag Company — a long time employer of Baker — hot pink was not a standard fabric they had on hand.

Hot pink would not be the only casualty. When the 1979 Gay Freedom Day parade — a precursor to modern parades of today — was being planned, organizers wanted to line Market Street in San Francisco with the banner. Having 7 stripes proved problematic, as one stripe would end up obscured by the pole itself. Turquoise was removed to make the design symmetrical, and indigo shifted to the royal blue on the flag today.

Earlier this year, Daniel Quasar proposed a new, “progress”-focused design for the rainbow flag. The design puts white, pink, light blue, brown, and black stripes in an arrow on the left on top of the six-striped rainbow flag.

The light blue, pink, and white stripes on the left come from the transgender flag. The brown and black stripes represent people of color, “as well as those living with AIDS, those no longer living, and the stigma surrounding them,” Quasar writes.

The new stripes are in the form of an arrow pointing right “to show forward movement.”

A man may have gotten the death penalty because he’s gay, but should LGBTQ orgs help him?