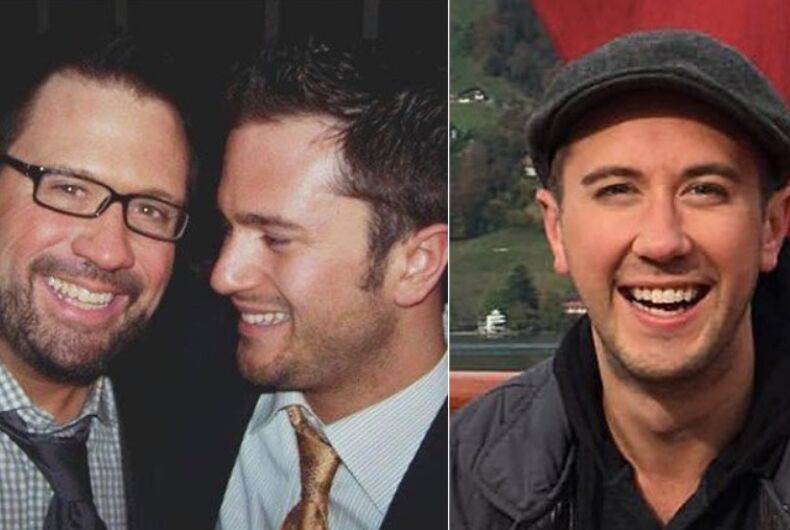 David Daniels (l) and Scott Walters (r) in the picture on the left, and Scott Schultz.Photo: Facebook

One of the world’s most famous opera singers has taken a leave of absence from his teaching job after being accused of drugging and raping a student in 2010.

In an interview with the New York Daily News, Samuel Schultz, 32, said that he was drugged and raped by David Daniels, a countertenor and a music instructor at the University of Michigan, and his husband, Scott Walters, a conductor.

He said it happened when he was a student at Rice University. He had a chance to meet Daniels when the singer was performing with the Houston Grand Opera.

Schultz attended a performance of Handel’s Xerxes, went to the cast party afterwards, and was invited back to Daniels’s and Walters’s apartment. He said they gave him a drink and he lost consciousness, waking up the next afternoon, naked and with a bleeding rectum.

He said Daniels told him they had intercourse without a condom.

The incident came to light in a post on Schultz’s website, where he wrote that “a celebrated opera singer and his boyfriend” raped him when he was a grad student. He didn’t include their names – that came out in a later interview.

“In fact, I was so naïve that I didn’t know that I should have gone to the hospital or even what a ‘rape kit’ is,” he added.

He said that he kept quiet about the rape because he feared for his career. He was a grad student in 2010, and Daniels and Walters are a power couple in the classical music world. In 2014, they were married by Supreme Court Justice Ruth Bader Ginsburg.

But he wrote that he wants to inspire others to come forward and to raise awareness about male rape.

“Our voices, our stories, our choices, and our hope create a shared strength that is more powerful than the dehumanizing tactics of those for whom the truth is inconvenient and who wish for our silence,” he wrote.

Daniels and Walters have denied the allegations as “false.”

The New York Daily News quoted two people who said that Schultz told them about the rape shortly after it happened.

Schultz said that the University of Michigan Police Department contacted him after his post online, and that his statement has been passed along to the Houston Police Department, which is conducting an investigation.

The University of Michigan has confirmed that Daniels has taken a leave of absence.

“At the University of Michigan, every report we receive, in whatever form, is taken seriously and is carefully reviewed for appropriate action,” a spokesperson said.

Schultz is now a baritone and has sung with the Washington National Opera.