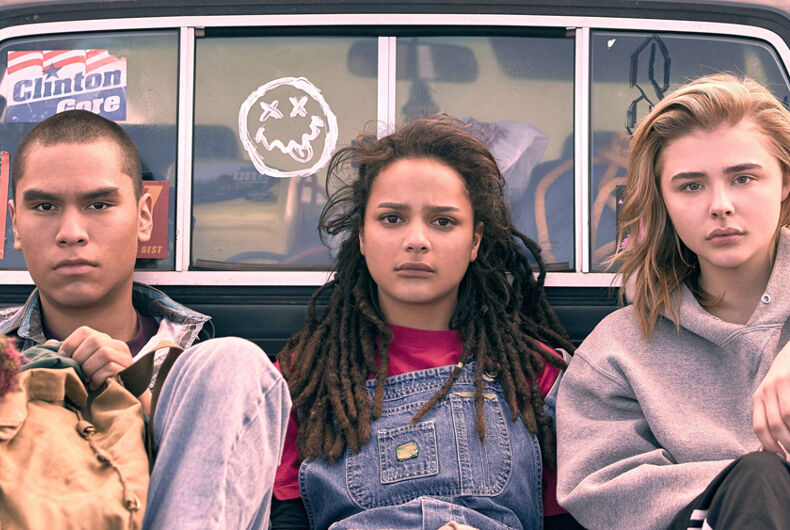 Chloë Grace Moretz and the cast.Photo: The Miseducation of Cameron Post

Actress Chloë Grace Moretz is throwing shade at a rival film featuring LGBTQ characters – and it’s about to get real.

Moretz, 21, stars in the coming of age conversion therapy drama The Miseducation of Cameron Post. In the film, she plays the role of Cameron, a girl who gets caught having sex with the prom queen and is sent to an inhumane camp for reform.

While promoting the movie, Moretz revealed her stance on LGBTQ stories on-screen, specifically that “queer films should be made be queer people.” It was a reference to the rival film Boy, Erased due out in November.

Moretz not only threw shade at the difference in directors, she also tossed some soil at the competition’s cast.

“This movie was directed by a bisexual woman of diversity, it has a very diverse cast and we didn’t cast all celebrities,” Moretz said. “You just look at the discrepancy and that’s shocking.”

To be fair, Boy, Erased is an on-screen adaption of the memoir of the same name written by Garrard Conley. The memoir – and subsequent film – recounts Conley’s experience at a gay conversion therapy camp in 2004.

In real life, Moretz is recently uncoupling from on-again/off-again boyfriend Brooklyn Beckham. She has two gay brothers and has been relatively outspoken regarding gay rights.

.@ChloeGMoretz is a revelation as the titular heroine of @DesireeeAkhavan’s THE MISEDUCATION OF CAMERON POST (@CamPostFilm), a deeply compelling and enormously affecting portrait of queer adolescence, opening in select theaters tonight. Do not miss this: pic.twitter.com/kRxT5dbSag

"This is such a delicate story that has to be told by queer people for queer people through a queer lens." @ChloeGMoretz https://t.co/mgpauv9WMI

QAnon conspiracy theorists are rallying for Trump, but why?