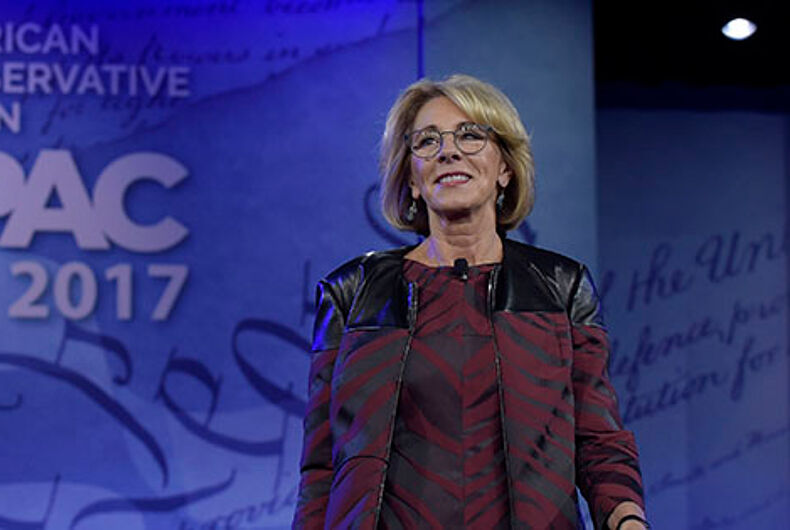 Education Secretary Betsy DeVos is considering allowing schools to use federal funds to purchase firearms for teachers. The unprecedented move would set the Department of Education squarely at odds with efforts by Congress to restrict the federal funding of guns.

DeVos, who has shown callous disregard for the civil rights of students, wants to exploit a loophole in a student support program meant to increase academic and enrichment opportunities for some of the poorest schools in the country.

The program does not include the mandate banning use of the funding for the purchase of firearms. DeVos thinks that the guns would fall under “improving school conditions.”

Improving the condition of LGBTQ students – transgender students in particular – has not been a priority for the Secretary. Shortly after assuming the position, she announced that the department would no longer accept or investigate allegations of discrimination by trans students and removed Obama-era protections for trans students.

She has advocated for giving a billion dollars to private schools that actively discriminate against queer students and actively associates with anti-LGBT hate group leaders.

A transgender woman is currently suing a company connected with DeVos’ husband for discrimination.

DeVos’ brother, Erik Prince, is the founder of the controversial mercenary army Blackwater that fought in the Iraq and Afghanistan wars. Prince has been implicated for trying to set up a back channel mode of communication between the Trump administration and Russia.

Both the Prince and DeVos families are heavy donors to the anti-LGBT hate group Family Research Council.