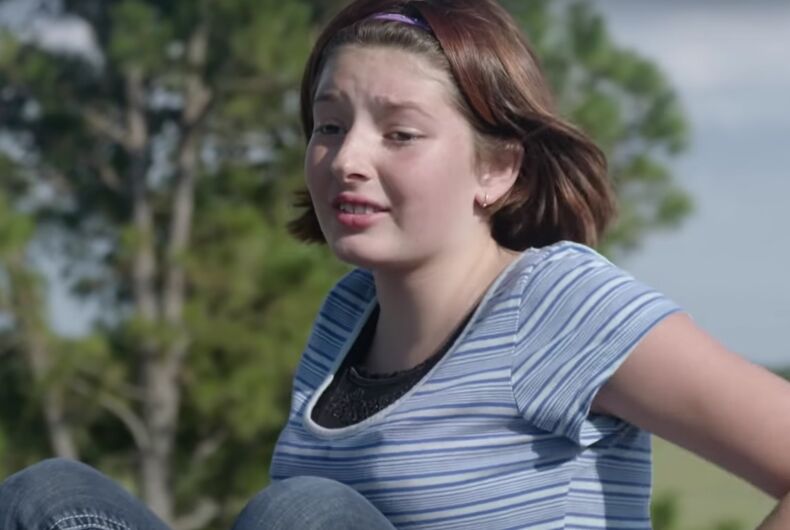 A transgender 12-year-old girl in Oklahoma who was the target of violent comments from adults in her town is now speaking out against the hate, while her family gets ready to leave the town.

The violent comments on Facebook drew national attention a couple weeks ago because of their casual brutality.

But her trouble in the small town started well before that discussion. Maddison Kleeman Rose’s family moved to Achille, Oklahoma, several years ago, and she presented as a girl.

In fifth grade, a teacher outed her after looking up Maddie’s old school records, and then the whole town knew.

School administrators called in her parents and told them that their daughter would have to use the staff bathroom.

“To be honest, Maddie didn’t care,” her mother, Brandy Rose, said. “They had already shown Maddie the staff bathroom and she was like ‘Oh, it’s bigger, it smells better.’ She was happy.”

But people in the town talked and the issue went beyond bathrooms. Maddie had a confrontation with Burney Crenshaw, a adult man, when she attended a father/daughter dance with her stepdad, Cory Rose, this past April.

Crenshaw asked her repeatedly if she was a boy, and she kept on saying that she was a girl, until her father intervened. This upset the Roses.

“My personal opinion is when you’re asking somebody if you’re a boy or a girl, you’re asking what their genitalia is,” Rose said. “My daughter’s genitalia? None of your business.”

When she started middle school, no one showed her where the staff bathroom is, so she went to the girls room. Crenshaw heard about it, posted about it on Facebook, and that’s when the violent comments started.

“Who would do that? To a 12-year-old?” Maddie said in an interview with Vice News Tonight on HBO. “They can be hateful and rude about it, but they ain’t dragging me down.”

Despite her brave front, the family is too scared to stay in Achille. Even during the interview, someone in a truck slowed down in front of their house and the police warned Vice about doing an interview in their town.

“This is why we’re moving,” Brandy Rose said.

After the threats, the family started a GoFundMe page to move away from the town where they no longer feel safe. They have raised almost $54,000 so far and Rose wrote that they have found a new home in Houston.