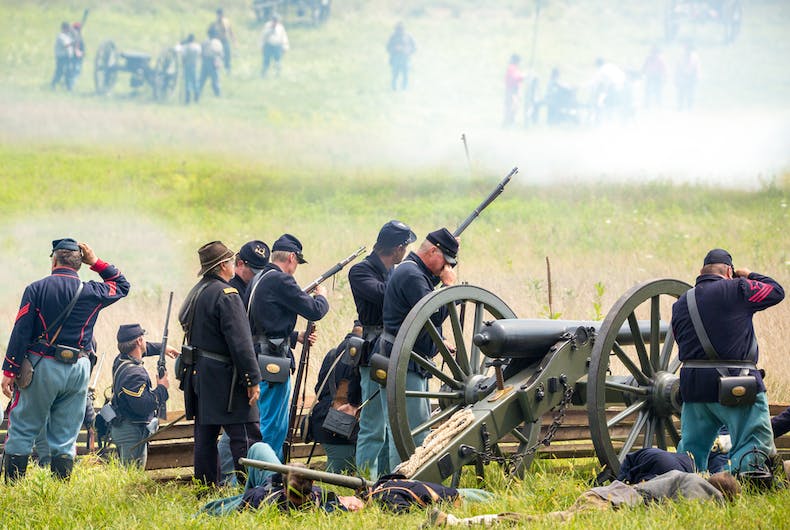 Union soldiers fight during a reenactment of the Civil War Battle of Gettysburg.Photo: Shutterstock

After Alex Jones claimed that liberals would start a second Civil War on the 4th of July, the internet quickly devolved into two opposing sides: Those who believed the crackpot conspiracy theorist and those who mocked the sheer craziness of it all.

After all, what good progressive would schedule a massive protest without posting it on Facebook? Why didn’t we get invites?! We’d have brought brownies.

Twitter users spent the weekend writing #secondcivilwarletters to send home from the front lines of the imaginary snowflake uprising with hilarious results. Even celebrities and politicians got involved – including Republican Senator Orrin Hatch.

Please forgive my extended absence. I have been anxiously engaged in efforts to take ownership of the progressive factions, who have come to battle ill-prepared and armed with predictable stratagem.

We will be victorious.

My Darling,
War is hell. The Battle of Trader Joe's lasted many days. We lost half our battalion, some to enemy fire, some to the dreaded Covfefe virus. I still live, but for how much longer I do not know.

I write to you with a heavy heart. I was gravely memed during a skirmish with a squad of Incel Irregulars. Doc Tibbens says there’s nothing for it — he will have to amputate my Twitter feed.

We await the Battle of Whole Foods and I think upon the many happy hours we spent here, searching for organic sunchokes and fresh, wild-caught salmon. How I long for your sweet kisses and a SmartWater. A kale salad would be nice, too.#secondcivilwarletter

My Darling, After a stunning victory at Bowling Green our unit refueled with hot cups of Covfefe. We received our updates From General M. Obama via microwave, so we were prepared for the sea of MAGA hats & ill-fitting khakis. Why have they no tailors? #secondcivilwarletters

War is not what Call Of Duty prepared me for.

Generals Eric and Jr. tell us we must hold the Hobby Lobby parking lot, but the Libs have posted signs saying "free beer this way." No one returns from the free beer.

My resolve is weakening.

But what happened to the civil war that never happened? It got rescheduled. Tell your friends so we’re ready next time.

And just for fun, here’s the video that started it all.

This airport is flying a rainbow flag made of 6,000 kisses