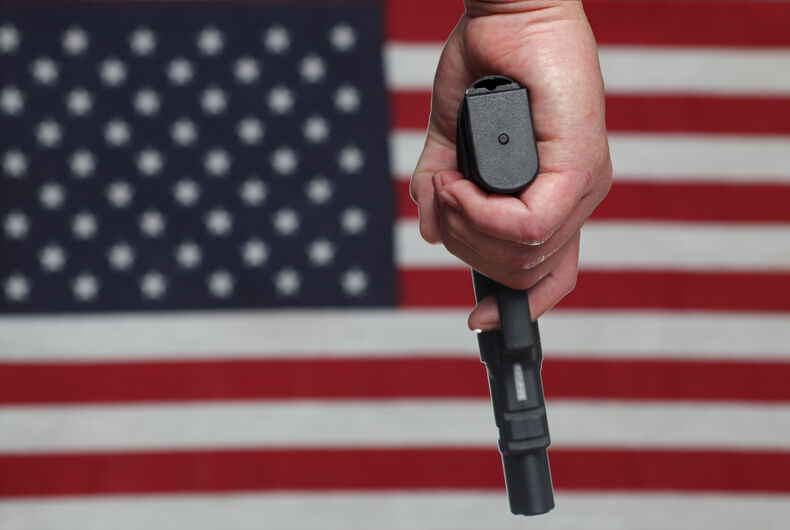 This week we celebrate July 4th with rounds of festivities marking our nation’s 242 years of independence. And scenes of hyper-patriotism will be on display, too.

People will be singing the Star Spangled Banner or reciting the Pledge of Allegiance or reenacting the Continental Congress of 1776 or simply watching reproductions of the “rockets red glare and bombs bursting in air.” All of this and more will be done on a grander and more highly commercialized scale to show ourselves, and the world, our mettle to “Make America Great Again.”

America’s need to showcase her nativist spirit of patriotism comes at the expense of fundamental freedoms and protections denied to various disenfranchised, vulnerable, and historically marginalized populations in the country and immigrants.

For example, Trump’s indefensible immigration policy of criminally punishing undocumented immigrants crossing the border from Mexico into the U.S. highlights how Trump’s “zero-tolerance” policy means zero humanity – first separating children from their families, even a child while being breastfed, to now locking up families together indefinitely in detention centers.

Another example. The litmus test of American patriotism in sports these days is whether or not you stand for the national anthem, ignoring that the protest started as a statement against police brutality and systemic racism. However, since 9/11 the militarization of our sports culture has created a sports-military complex that now many white fans come not only for the entertainment but they come to display fidelity to police and the military, too.

With Trump now having an opening to appoint an anti-choice Supreme Court justice to the bench in the hope of overturning Roe v. Wade, women’s reproductive justice issues will no longer be of serious consideration, impacting predominately poor, disabled, and women of color.

There is already an erosion of LGBTQ civil rights under the guise of religious liberty. A new Trump Supreme Court justice will likely go after Obergefell v. Hodges, returning same-sex marriage to the states.

While Trump bloviates his isolationist rhetoric to “Make America Great Again,” our democracy hangs in the balance, revealing both its hypocrisy and its inhumanity. However, this is not the first time America’s Independence Day celebration didn’t include all its citizens.

I am reminded, for example, of the African-American abolitionist Frederick Douglass’s historic speech, “What, to the slave, is the Fourth of July?” In it, he stated to a country in the throes of slavery, “What have I, or those I represent, to do with your national independence… I am not included within the pale of this glorious anniversary! Your high independence only reveals the immeasurable distance between us… This Fourth of July is yours, not mine.”

As a lesbian, one of our most significant moments of patriotism in this last century was the Stonewall Riot of June 27-29, 1969, in Greenwich Village, New York City. And, as an African American, I am proud to live up to what the Rev. Dr. Martin Luther King, Jr. said in his Montgomery Bus Boycott speech on December 5, 1955, “The great glory of American democracy is the right to protest for right.”

When patriotism is narrowly defined, as it is today, it can only be accepted and exhibited within the constraints of its own intolerance, and narrow worldview, like Trump’s travel ban (a.ka. Muslim Ban), upheld last week by the Supreme Court in a 5-4 decision.

Evangelical patriotism is suffused with conservative or fundamentalist tenets of Christianity. It waves the flag of “God, Guns, and Glory” that’s sadly shaping today’s American landscape. Perhaps that’s why when America’s school-age children ask for gun reform at the “March for Our Lives” rally held in the nation’s capital, our government is willing to spend more money arming teachers with guns than supplying them with textbooks and computers.

Since September 11, America has changed radically. America’s acceptance of racially and religiously profiling Muslims or those who look like or who worship like Muslims is all done in the name of patriotism, but it is really fear and hatred of the “other” and is un-American.

And this ugliness has imploded on us.

We have become a country where partisan politics rule the day, where we can no longer agree to disagree, and where shouting matches laced with expletives has taken the place of civil discourse.

One of our most famous American Revolution heroes is Patrick Henry. His famous words, “Give me liberty or give me death,” in his speech on March 23, 1775, explained how he viewed himself as the “other” yet maintained the core value of being an American patriot.

“No man thinks more highly than I do of patriotism… but different men often see the same subject in different lights; and, therefore, I hope it will not be thought disrespectful to those gentlemen if, entertaining as I do opinions of a character very opposite to theirs, I shall speak forth my sentiments freely, and without reserve.”

With so many Americans this Fourth of July feeling the effects of a polarized country, this Independence Day celebration is for whom?