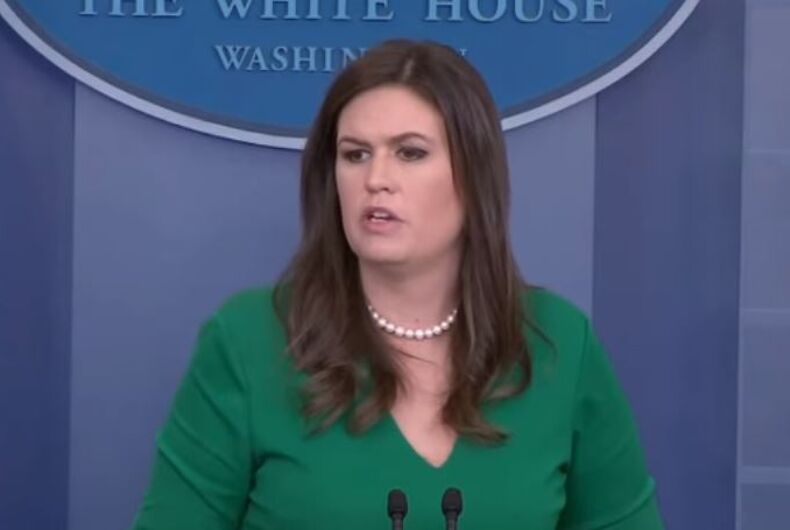 Now is not the time to be on our best behavior. Now is the time for acting out.

It’s been one hell of a Pride Month. Our government has ripped children from their parents’ arms, based on a policy of deliberate cruelty. The Supreme Court courts rulings on everything from “religious freedom” and immigration to workers’ rights signal a sharp right turn. Justice Kennedy’s looming retirement likely dooms 60 years of progress civil rights, reproductive freedom, and LGBTQ equality.

But the most important thing right now is that we mind our manners?

Right-wingers now have an opening to deny services and accommodations to anyone who doesn’t toe the line on their religious tenets. The Trump administration took asylum-seeking families and children hostage to try and force its immigration agenda through Congress. The Supreme Court just dealt what may be a killing blow to labor unions.

But telling Our Lady of Perpetual Lies, Sarah Huckabee Sanders, to find somewhere to eat is taking things too far?

Sanders took to Twitter to complain after gay employees at the Red Hen restaurant in Lexington, Virginia, urged co-owner Stephanie Wilkinson to tell Sanders that she wasn’t welcome in the restaurant. Wilkinson said her employees were upset with the Trump administration’s ban on transgender servicemembers and Sanders’ praise for a Supreme Court ruling in favor of an anti-gay baker who denied service to a same-sex couple.

The Sanders incident came on the heels of a few other members of the Trump administration facing public scorn and confrontation.

Suddenly, pundits who shrugged at stories of kids in cages, and tut-tutted the trauma inflicted on these children and families, clutched their pearls.

The party that brought us a president who chucked Starbursts at another world leader, mocked a disabled reporter, and boasted of grabbing women “by the pussy” is concerned about civility.

The response they deserve is one printed on a t-shirt worn by Trump supporters: Fuck your feelings.

Trump supporters, staffers, advisors and cabinet members can advocate and enact inhumane policies, and we’re supposed to bring them their appetizers, say “please” and “thank you,” and pretend everything is cool? Next the pundits will say we have to date them too.

Politics not a garden party. Policies and judicial opinions are not merely words on paper. They impact the lives of real people and cause real suffering. Lives are at stake.

These are not normal times. The usual rules of engagement do not always apply. In fact, they may only serve to normalize the atrocities committed by this administration.

Civility, some might say, is what got us here. And it won’t get us out of this mess. As Dr. Martin Luther King Jr. wrote that the goal of nonviolent direct action is “to create such a crisis and establish such creative tension that a community that has consistently refused to negotiate is forced to confront the issue.”

Sometimes that “creative tension” King spoke of requires the tactics of confrontation and disruption. That’s something worth remembering after a Pride Month in which we commemorate the “creative tension” ignited at Stonewall, and practiced by groups like ACT-UP and Queer Nation.

To paraphrase an often-used quote, well-behaved movements, seldom make history. Nor do they make much of a difference.

Journalists’ listserv shows how prevalent transphobia is in the media