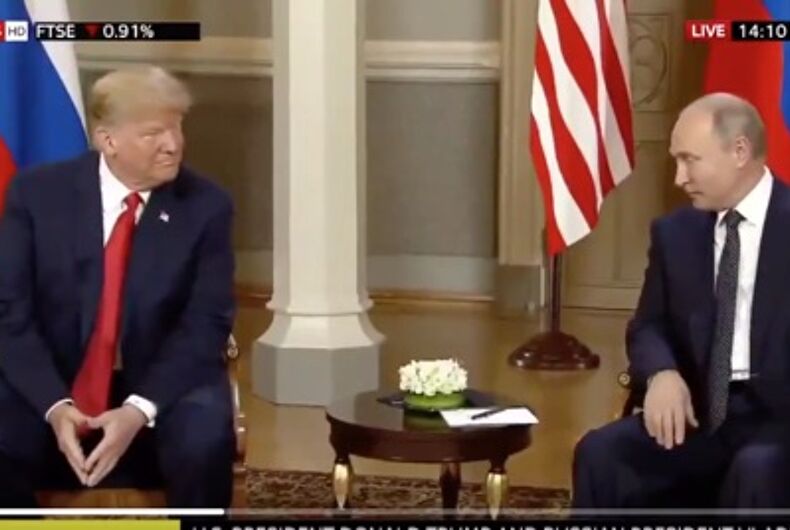 Awkward. During a press conference at their meeting in Helsinki, President Donald Trump shot Russian President Vladimir Putin a wink in front of reporters.

While several politicians have made headlines by utilizing the weirdest thing people do with their faces, Trump’s show of friendship comes days after 12 Russians were indicted for hacking DNC servers as part of the country’s attempt to influence the American presidential election.

Former President George W. Bush winked at Queen Elizabeth, setting off a media fury. A year later, Sarah Palin winked during the 2008 vice-presidential debate. But neither had quite the bromance with one of America’s biggest enemies.

Trump, who has repeatedly held hands with other male leaders despite getting his hand batted away repeatedly by his wife, seems to crave physical attention as much as he loves his ratings. This doesn’t mean he’s gay, it means he’s insecure. He wants approval.

It doesn’t take a specialist in body language to tell us that.

A wink is an informal mode of non-verbal communication usually signaling shared hidden knowledge or intent.

Trump didn’t want a note-taker in his #TreasonSummit meeting with Putin.

Trump favors an enemy of America over America. He’s Putin-whipped. He’s scheming with the enemy. https://t.co/8j2OjivyKc

ONION editor: "Can we be a little less cartoonish? I mean that's just hack."

He escaped Chechnya’s anti-gay violence. Until his father helped police kidnap him.