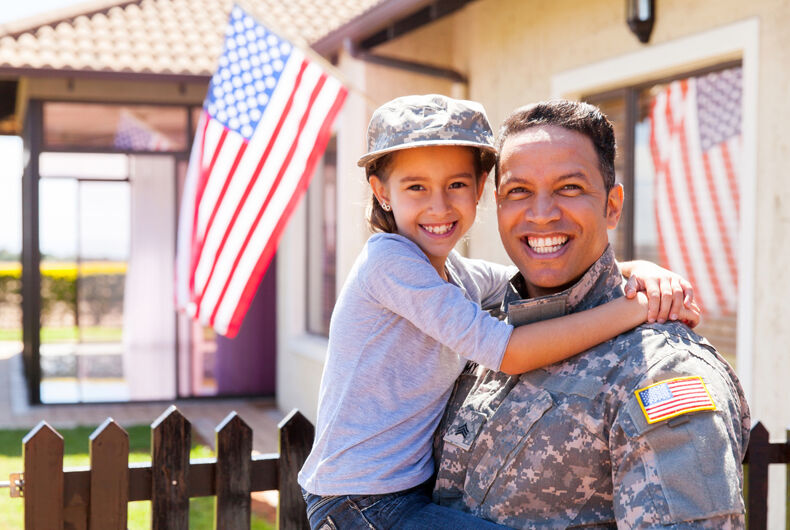 Under order from Donald Trump’s Department of Defense, the U.S. Army has been discharging immigrant recruits and reservists who enlisted under a program initiated in 2008, which can lead to a path to naturalized citizen status.

When pressed for a reason for this policy, DOD officials tell recruits that they pose “security risks” to the U.S. because they have family members abroad for whom the military cannot properly conduct background checks.

The DOD announced that “All service members (i.e. contracted recruits, active duty, Guard and Reserve),” as well as those who have received honorable discharges, “are protected from deportation.” According to lawyers for several of the immigrant recruits, however, their clients have been given an “uncharacterized discharge,” a neutral designation falling under the standard of “honorable.”

Not “neutral,” though, this reversal of policy is yet another clear and unambiguous attack on immigrants and immigration from the Trump administration. Also obvious is the fact that Donald Trump lacks interest in and knowledge of the vital role immigrant military recruits have played in the history of the United States.

Baron Friedrich Wilhelm von Steuben, a renowned tactical military specialist from Prussia, arrived on the shores of Portsmouth, New Hampshire on September 26, 1777. His purpose was to join the Continental Army in its Revolutionary War of independence from the British.

By this time, the Continental Congress had fled Philadelphia in advance of British troops and had settled in York, Pennsylvania. General George Washington was commanding a rag tag band of volunteers, and Steuben donated his services for no salary to develop a military training program.

What Steuben accomplished was nothing short of phenomenal, for he turned a scrubby assemblage of farmers and merchants into a unified, efficient, and powerful force.

He instituted a method of “progressive training,” a sort of school for the soldiers. He raised the standards for maintenance of uniforms and military hygiene. He taught the effective use of the bayonet, which increased soldiers’ ability to attack and to defend themselves even when their rifles were unloaded.

His techniques are credited for the Continental army’s victory in several battles, including the battle of Stony Point. He also developed an efficient system of camp sanitation by developing standards and the more effective arrangement of tents and other living structures, latrines, and mess halls. These procedures remained in effect in the U.S. military for more than a century and a half.

General Washington gave Steuben command of one of the army’s divisions for the final battle at Yorktown. Following victory, Steuben assisted Washington in demobilizing the army in 1783, and he helped to craft a defense policy for the infant nation.

Steuben was awarded a military discharge with full honors on March 24, 1783. Through an act of the Pennsylvania legislature in March 1784, Steuben became a citizen of the United States and later settled on Manhattan Island.

Though Steuben contributed in profound ways to the Continental Army’s victory over the British, which resulted in what we know today at the United States of America, and while he deserves a prominent place in the pantheon of our country’s military leaders, how many of us have ever heard of him?

Where is he mentioned in our school textbooks, or in the discussions focusing on the founding of the United States? Why has this hero who contributed so greatly been virtually forgotten, while lesser figures are often referenced?

I would put forth that the primary reasons for this erasure is the documented historical evidence that Steuben was an immigrant (whose family could not be properly vetted), and because he was, in modern terminology, “gay.”

Each year, on March 25, the U.S. commemorates National Medal of Honor Day set aside to recognize recipients of our nation’s highest award for bravery and courage. Since the first Medals of Honor were presented during the Civil War, more than 700 recipients of the award have been illustrious immigrants who went over and above the call of duty on the field of battle.

U.S. Citizenship and Immigration Services identifies the exceptional bravery of this exclusive group of heroes by devoting places in 29 facilities in their name to honor their gallantry and valor. These 29 are listed throughout this commentary.

If it had not been for the efforts of Baron Friedrich Wilhelm von Steuben, a gay immigrant, and all the fine immigrant military service members since the first joined in 1775, we very well could find ourselves under the realm of Queen Elizabeth II from the House of Windsor, rather than under the rule of would-be King Donald from the House of Orange.