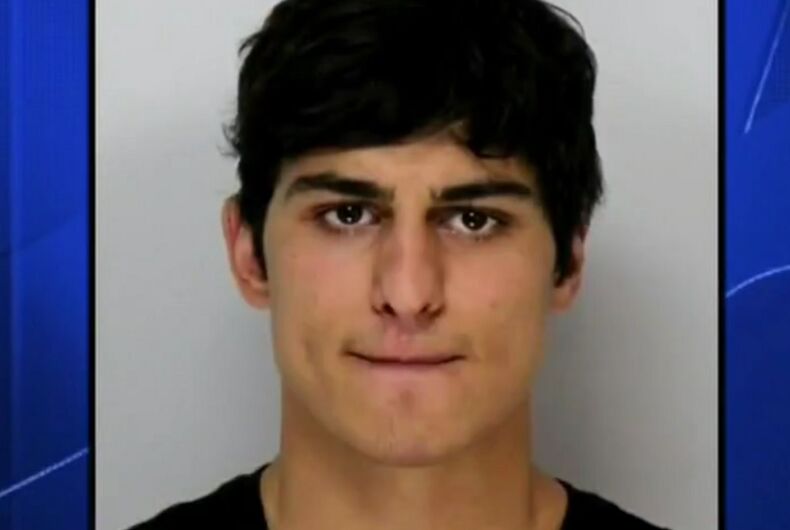 A teen has been arrested near Boston after he allegedly locked up a gay man and beat him for four days.

Jackson Sugrue, 19, is facing several charges because police say he locked Otoni Eliseu, 50, in a church bathroom and beat him for days.

Eliseu, who was homeless and staying at the Philadelphia Baptist Church in Framingham, Massachusetts, said that they were hanging out last Wednesday at the church when Sugrue suddenly became violent and wouldn’t let him leave.

Eliseu said that Sugrue pulled him from the bed to the floor and choked him and stepped on his throat.

“He attacked me on my back, on my butt, [saying] ‘you’re gay, you like me,'” Eliseu, who is from Brazil, said. He said that Sugrue beat him with a fire extinguisher while shouting anti-gay slurs.

He said that Sugrue took away his phone, locked him in the bathroom, and didn’t give him food or water.

On Saturday, Eliseu managed to get out and run away. Police found him while responding to a call about someone being beaten with a bat at 5:40 p.m., and said that he was only wearing pants and covered in bruises, scratches, and blood.

“Jesus was helping me, thank God I’m alive,” Eliseu said. He was taken to the hospital for treatment.

At a hearing yesterday, though, Sugrue’s lawyer said that he’s the real victim, that Eliseu tried to make a move on him.

Eliseu “was trying to entice my client to do things that were against his nature,” the lawyer said.

“My son is a victim of a 50-year-old man,” Terry Sugrue, Jackson’s mother, said.

“It’s absolutely ridiculous to suggest my son would have anything to do with a hate crime,” Frank Sugrue, the father, said.

Eliseu said that does not know anyone in the U.S. and he thought Sugrue was his friend.

This safe sex video game cut STI rates, according to a new study