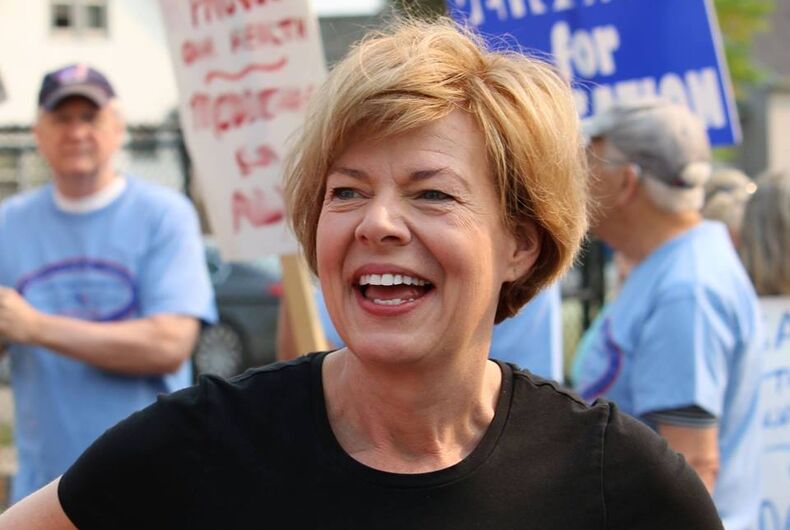 Democrats are hopeful of a blue wave in this fall’s midterm elections, but they’re facing an uphill battle in the Senate. Of the 35 Senate seats on the ballot this fall, 26 are held by Democrats. Several of those are in states that Donald Trump won by wide margins in 2016, including North Dakota, Indiana and West Virginia.

But perhaps the most interesting race is in Wisconsin, where out lesbian Tammy Baldwin is defending her Senate seat. The conventional wisdom in both parties is that Baldwin’s seat is safe, so much so that Democrats have not included her among their top-tier focus races.

It’s true that Baldwin has a lot of advantages, starting with incumbency. She’s done a good job of raking in campaign contributions. Her campaign took in $8 million this year (through June) and has $7.2 million on hand. But that pails in comparison to the deep pockets of the ultra-conservative Republicans out to get her.

The last time Democrats thought they had Wisconsin sewn up was in 2016. Hillary Clinton was expected to carry the state, but Donald Trump won by a margin of just 26,000 votes. More to the point, Democrat Russ Feingold was looking like a shoo-in to beat incumbent Republican Sen. Ron Johnson. Instead he lost.

It’s those type of surprises that is leading Baldwin to remind her fellow Democrats that her seat is far from safe. There are already plenty of signs that conservative groups are willing to do whatever it takes to make sure this year is a replay of 2016.

Baldwin’s Republican opponent has yet to be chosen (the primary is August 14), but already Club For Growth Action Wisconsin, a group backed by office supply magnate Richard Uihlein, has spent more than $7.5 million in ads attacking Baldwin and supporting Kevin Nicholson.

Nicholson is a former Democrat who spoke in favor of abortion rights at the 2000 Democratic presidential convention. He says that his personal experiences since then, including “my acceptance of Jesus Christ as my savior,” led him to the GOP. He recently accused his own parents of being “a true representation” of intolerance because they contributed the maximum amount to Baldwin’s campaign.

Nicholson’s main opponent is state Sen. Leah Vukmir, who is trying to portray herself as the only real conservative in the race. Vukmir has produced campaign materials lumping Baldwin with Khalid Sheikh Muhammed, the mastermind behind the 9/11 attacks, as “Team Terrorists.”

Nicholson and Vukmir are slugging it out in a bitter fight that will leave lingering scars for the winner. But the wads of cash that conservative donors like Uihlein are ready to spend will go a long way to heal the wounds. The actual nominee may not matter so much to them as bring Baldwin down.

Baldwin is the most liberal Senator up for re-election in states that Trump has won. Earlier this month, she was campaigning with Sen. Bernie Sanders, giving Republicans another reason to attack her as out of touch with the state.

Still, Baldwin knows how to cater to her constituents. She’s introduced legislation that would allow all of Wisconsin residents to see Green Bay Packers football games. At present, the game is blacked out in some counties that are designated as “out of state” because of the television market that they are in.

If the much-discussed blue wave comes to pass, Baldwin should have no trouble returning for a second term. But wishful thinking doesn’t make it so. Just ask Russ Feingold and Hillary Clinton.