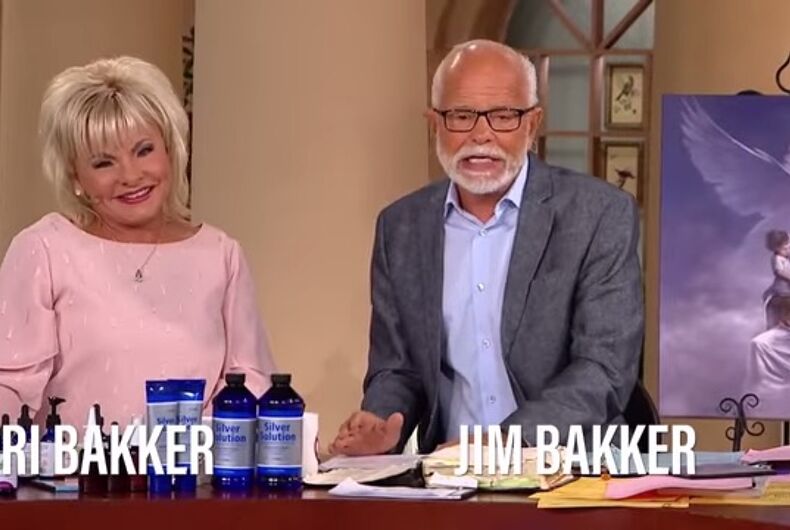 When it comes to money, television preachers have always been a suspect bunch.

For one thing, they’re always looking for more of it. And they’re fabulously wealthy. Pat Robertson, whose wealth is estimated at least $100 million, once spent $520,000 on a race horse.

Moreover, the televangelists don’t make any apologies for their lavish lifestyles. They are preaching the gospel of prosperity, where their piles of money are proof positive that they are in God’s favor. (They gloss over the bit in the Bible about it being easier for a camel to pass through the eye of a needle than a rich man to enter heaven.)

Greed begets greed, so it’s no surprise that the ministers are not content merely to beg for contributions. They sell a dizzying array of merchandise. A lot of it is the usual variety of books and tapes. But there’s also pitches to buy the kind of stuff you’d expect to see hawked during a late night infomercial.

Robertson is among those who have cashed in on his followers’ willingness to buy products just because they’re his. Robertson sold Pat’s Protein Shake (alternately known as Pat’s Age-Defying Shake), touting his discredited claim to leg press 2,000 pounds as proof of how good it is.

Other preachers have taken up the vitamin supplement pitch that is a profitable staple of right-wing sites like Alex Jones’ InfoWars. (That’s where Milo Yiannopoulos was pitching milk thistle extract to cleanse your kidneys.)

But without a doubt, the king of Christian infomercials is Jim Bakker, who, with his first wife Tammy Faye, ran the Praise the Lord (PTL) Club and was the epitome of the evangelical excesses of the 1980s. Bakker served time for fraud, temporarily ending his televangelist career. The stories of his affinity for sex with other men didn’t much help him, either.

But you can’t keep a good huckster down, and Bakker, with second wife Lori, is now back with his own cable channel that is a kind of evangelical QVC. Among the products that he plugs are Tasty Pantry Deluxe Food Buckets, full of food for viewers to survive the coming end times.

Place of pride seems to go to Silver Solution, which promises “to help with three of the main parts of the body’s healing process” whether in liquid or gel form. Bakker has said that among Silver Solution Gel’s miraculous properties is the ability to “get rid of all venereal diseases.”

While that’s a pitch that might not seem likely to resonate with your average evangelical viewer, it is a step up for Bakker. At one point, he was pitching enema kits.

Of course, should the government shut down Bakker for making unfounded health claims, you can guarantee he’ll scream that he’s a victim of religious persecution. In the meantime, he can count of bringing in the money of gullible viewers. It may not be on as grand a scale as his old PTL days, but it will do.