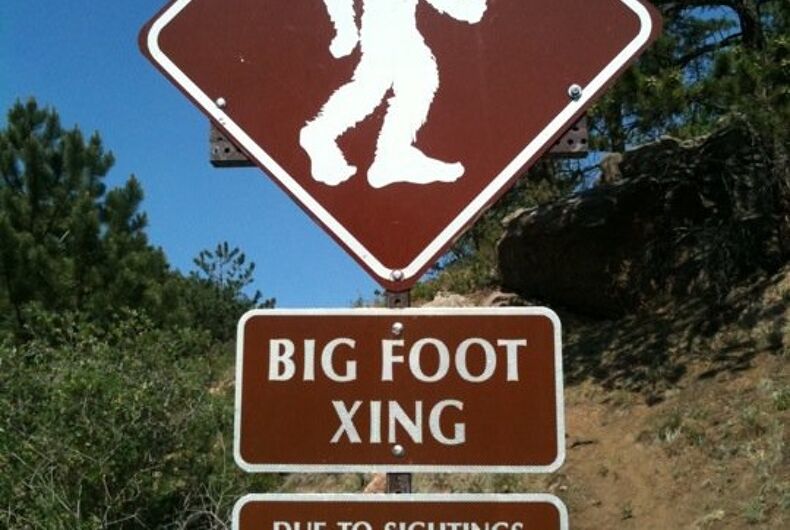 A sign posted "for your safety" on Pikes Peak Highway.Photo: Wikimedia Commons

Former Family Research Council fellow Tim Dailey was on Janet Mefferd’s Christian radio show where they discussed Bigfoot, and they decided that the mythical creature was created by the devil.

On the show, Mefferd brought up “the Bigfoot question,” asking Dailey how Christians should approach it.

Dailey made sure to note that, unlike other paranormal sightings, Bigfoot is probably real. He referred to the “many, many reliable observers” who reported seeing Bigfoot, but he said that there was a lack of evidence that the creature exists.

“It’s real. It’s a projection. It’s a demonic virtual reality, but it’s not nuts-and-bolts, in this case, flesh-and-blood creatures,” he said.

Mefferd asked why there aren’t any credible photographs of Bigfoot if it’s real.

“The vast majority [of pictures] happen in the dead of night and you wonder, ‘Why is this?’ And then if you remember the biblical verse about the powers of darkness that love darkness rather than light,” Dailey said.

He was possibly referring to John 3:20, which says, “Everyone who does evil hates the light, and will not come into the light for fear that their deeds will be exposed.”

Mefferd agreed that that’s how the devil operates, just like with UFO’s and alien abductions.

Then she raised an important question: why is the devil sending a creature like Bigfoot to do… nothing particularly harmful?

Dailey responded: “It’s part of the devil’s modus operandi. He has always used this kind of phenomena to, once again destabilize, to engender fear, to open us up to the possibilities of other realities and other beings and then we begin getting involved with demonic spirits. So yeah, all through history there have been many, many different varieties of beings that are primarily spiritual beings that have terrorized civilizations and peoples and non-Christian cultures are very aware of this.”

One would think that the devil would have better ways of terrorizing Americans than to appear in some grainy photographs, but apparently this is the best that Satan can do.