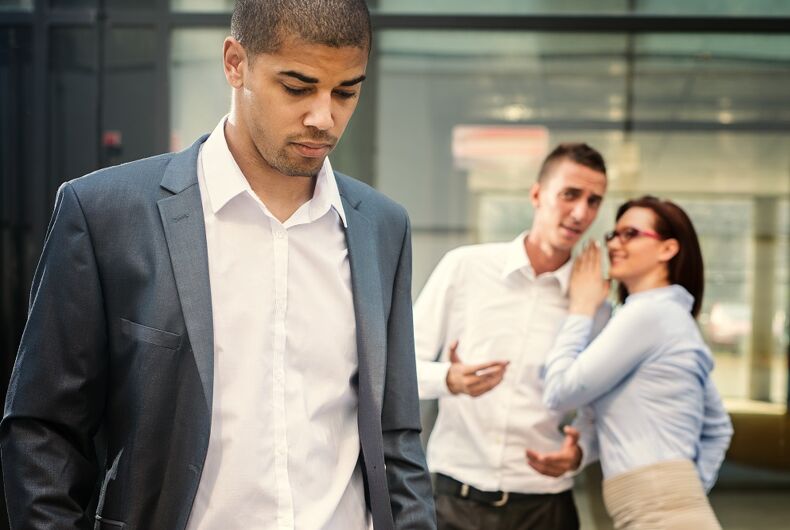 More than half of us are not out at work and the reason why probably won’t surprise you.

How many people at your place of employment sport wedding bands? How many have pictures of their spouses in the workspace? Do chats around the water cooler inevitably involve what they did with their spouses over the weekend?

It’s likely that the most of the people who are “out” in your workplace are those with the least to fear by being “out”: straight people.

A new survey by the Human Rights Campaign Foundation shows that more than half of LGBTQ employees remain closeted in their workplaces, which shows little to no increase over the last decade.

According to the survey:

Under the patchwork of nondiscrimination laws across the country, twenty states, the District of Columbia, Guam, and Puerto Rico have statutes that protect against both sexual orientation and gender identity discrimination in employment in the public and private sector. That means in most states you can be fired for being LGBTQ.

There is currently no federal law prohibiting employment discrimination on the basis of sexual orientation and gender identity. In 2013, the US Senate approved legislation outlawing workplace discrimination against LGBTQ Americans.

According to Out and Equal Workplace Advocates, one in four LGBTQ employees have reported experiencing workplace discrimination in the past five years, in a historic 64 to 32 vote in favor of the Employment Non-Discrimination Act. The House failed to act on the bill, and it went no further in Congress.

That most of us still fear that we might risk out livelihoods by coming out at work is a reminder that we still have work to do on LGBTQ equality. We can legally marry, at least for the time being. It’s time we were able to be out at work without fear.