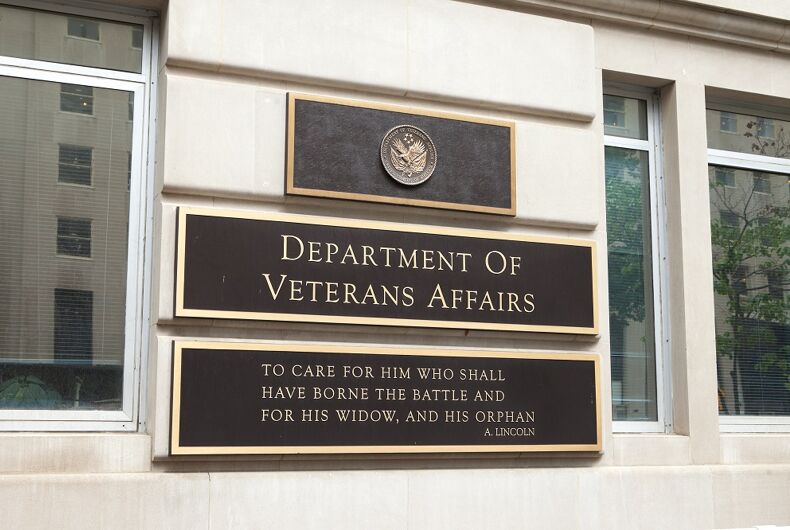 Signage at the Department of Veterans Affairs in Washington, DC on June 6, 2015. It includes a quote about caring for him wounded in battle and his widow and his orphan.Photo: Shutterstock

Despite attempts by the Veteran’s Administration to reach out to LGBTQ veterans, most prefer instead to seek support from other LGBTQ vets outside the organization.

For Pride month, many VA medical centers held outreach events, with one in Fort Wayne, Indiana, even removing military flags to display a pride flag.

The Fort Wayne location planned to display the flag for a day, but an unknown passerby lowered and removed the banner just hours after it was hoisted.

In spite of such outreach attempts, and likely due to incidents like the above, many LGBTQ veterans are uncomfortable accessing care they earned through their service. A recent article in Task and Purpose highlights the stories of several such vets.

The article cites the continuing stigma around policies like Don’t Ask Don’t Tell, the current attempts to ban transgender service members, and structural prejudices within the military as reasons many seek out other LGBTQ vets over the VA.

“A lot of veterans, even from my generation, aren’t comfortable being open about their sexuality and their sexual preferences at the VA,” said Raymond Curtis, a former soldier whose story is presented in the article. “A lot of people may still have that fear that was ingrained in you. Like, what if I lose my VA benefits? There’s just not that clarity of safety.”

Many also don’t feel comfortable in the civilian LGBTQ community.

The VA is open to LGBTQ troops, and established an LGBTQ specific health program in 2012. Nevertheless, these efforts seem to be under accessed, in favor of private care networks specifically geared towards LGBTQ servicemembers.

One such service, Strive Health, has recently partnered with OutServe-SLDN to provide mental health and substance abuse care for LGBTQ veterans.

Such care is all the more important given the recent side of substance abuse among veterans, many of which also suffer from Post-Traumatic Stress Disorder. According to the VA, roughly a third of vets have PTSD issues, with over a quarter of those also fighting substance abuse.

Now is not the time to be thinking about civility