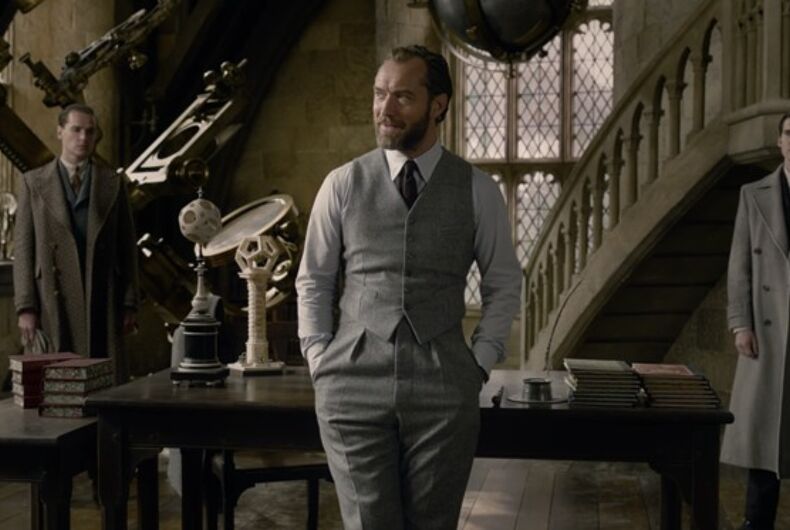 Dumbledore might not be visibly gay in the coming Fantastic Beasts movie, but Jude Law says a relationship with another man could be coming in a future film.

Fans were disappointed earlier this year when director David Yates said that Dumbledore would not be “explicitly” gay in Fantastic Beasts: The Crimes of Grindelwald, the second Fantastic Beasts movie. (Three more Fantastic Beasts films are expected from the franchise.)

Now Jude Law, who plays the role of young Dumbledore in the upcoming movie, said that fans could see a gay Dumbledore in a later Fantastic Beasts film.

“Jo Rowling revealed some years back that Dumbledore was gay. That was a question I actually asked Jo and she said, yes, he’s gay. But as with humans, your sexuality doesn’t necessarily define you; he’s multifaceted,” he said.

“I suppose the question is: How is Dumbledore’s sexuality depicted in this film? What you got to remember this is only the second Fantastic Beasts film in a series and what’s brilliant about Jo’s writing is how she reveals her characters, peels them to the heart over time.

“You’re just getting to know Albus in this film, and there’s obviously a lot more to come. We learn a little about his past in the beginning of this film, and characters and their relationships will unfold naturally which I’m excited to reveal. But we’re not going to reveal everything all at once.”

“Gay men don’t exist [in Hollywood]. Gods and Monsters [1998], I think, was the beginning of Hollywood admitting that there were gay people knocking around, even though half of Hollywood is gay.”

Fantastic Beasts: The Crimes of Grindelwald opens on November 16.