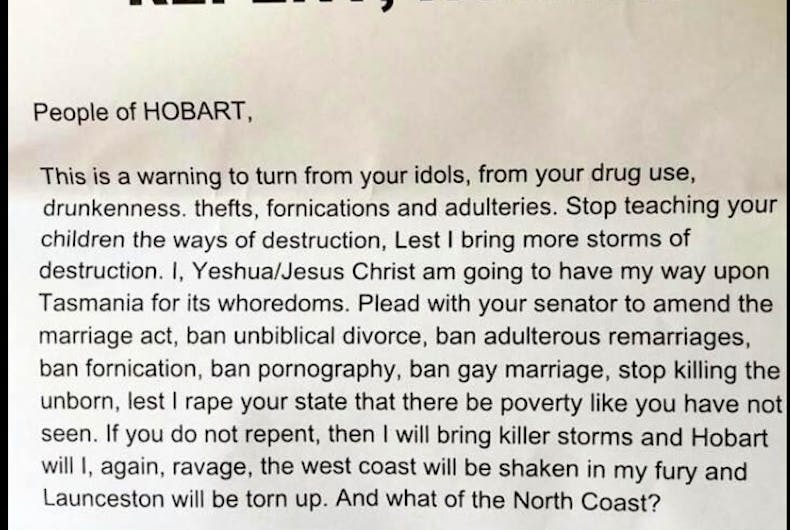 A letter found in mailboxes around the city of Hobart, Tasmania, claims to be written by Jesus Christ and promises to destroy the Australian state if they don’t reject a number of sex-related sins.

With the words “REPENT HOBART” across the top, a letter claiming to be from “Yeshua/Jesus Christ” warns the city of 200,000 to “turn away from their idols,” referring to a list of sins that includes theft and “fornications.”

“I, Yeshua/Jesus Christ am going to have my way upon Tasmania for its whoredoms,” the letter says.

“Plead with your senator to amend the marriage act, ban unbiblical divorce, ban adulterous marriages, ban fornication, ban pornography, ban gay marriage, stop killing the unborn lest I rape your state that there be poverty like you have not seen,” the letter continues.

The letter ends with another threat: “If you do not repent, then I will bring killer storms and Hobart will I, again, ravage, the west coast will be shaken in my fury and Launceston will be torn up.”

But the last line in the letter shows that Jesus isn’t just concerned with Tasmania’s west coast: “And what of the North Coast?”

Well, what of it? Please tell us!

170 years on, it seems Hobart is once again “the Sodom of the South Seas”. Thanks to Martine Delaney for this photo of a bizarre poster in Salamanca Courtyard.

Will there be a lesbian version of ‘Queer Eye’ coming soon?

Can the LGBTQ community trust Facebook after Zuckerberg says anti-Semitic posts are okay?