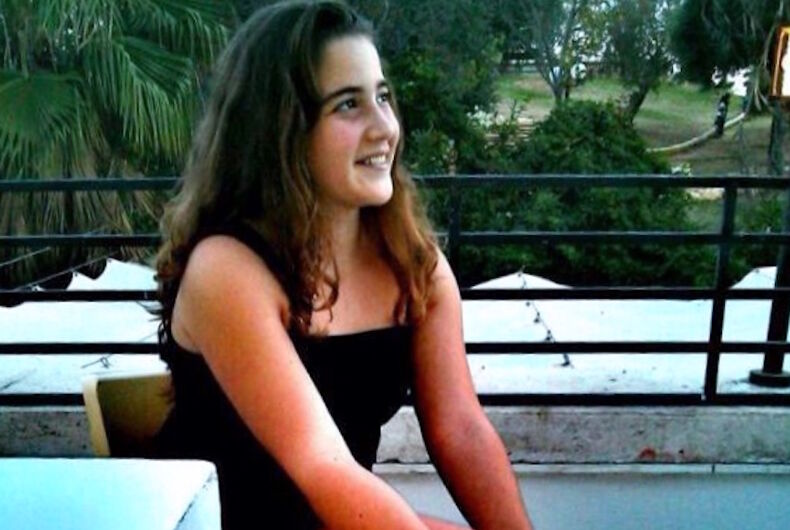 Shira Banki, 16, was stabbed to death during the 2015 Jerusalem gay pride parade by Yishai Schlissel, an ultra-Orthodox extremist Jew. Six other people were wounded in the attack.Photo: Family photo

A 16-year-old girl was murdered during Jerusalem Pride three years ago and, in an eerie turn, homophobic graffiti has just been found at the former crime scene.

With a string of recent anti-gay incidences in the area, onlookers can’t help but wonder if this is a sign of something horrible to come.

Jerusalem Pride has long been a trouble spot between Jerusalem’s secular community and its Jewish Orthodox groups.

The message scribbled at the attack site was written in Hebrew and translated to, “Thou shalt not lie with mankind, as with womankind: It is abomination.”

The condemnation of homosexuality was directly pulled from the Leviticus Bible verse.

Ultra-Orthodox Jew, Yishai Schlissel, went on a killing spree in 2015 where he stabbed six people. One of them, Shira Banki, later died in hospital.

Schlissel was responsible for the stabbing of four people at the same Pride parade in 2005.

Schlissel was sentenced to 12 years in prison after the 2005 attack, but only served 10 years. Three weeks later, he carried out the attack in 2015.

“The accused did not learn from the legal proceedings against him 10 years ago and from the long time he served in prison,” said prosecutor Oshrat Shoham. “He returned and he committed these crimes with an ideology of hate.”

During the hearing, Schlissel showed no remorse for taking the life of Banki.

“If you wish to do good for the late Shira, then every time people hold gay pride events that severely damages her soul, you should know that,” he said in court.

Adding, “Then if you want to uplift her soul, the gay pride parade should be stopped in Jerusalem and throughoutt the Land of Israel. Stop this provocation and abuse against the holy one, blessed be he.”

“We expect the authorities to act strongly and swiftly against vandalism and threats to the security of the gay community in Jerusalem,” they wrote.

Boy’s hateful granny burned his playtime dresses in front of him. Then dad came home.