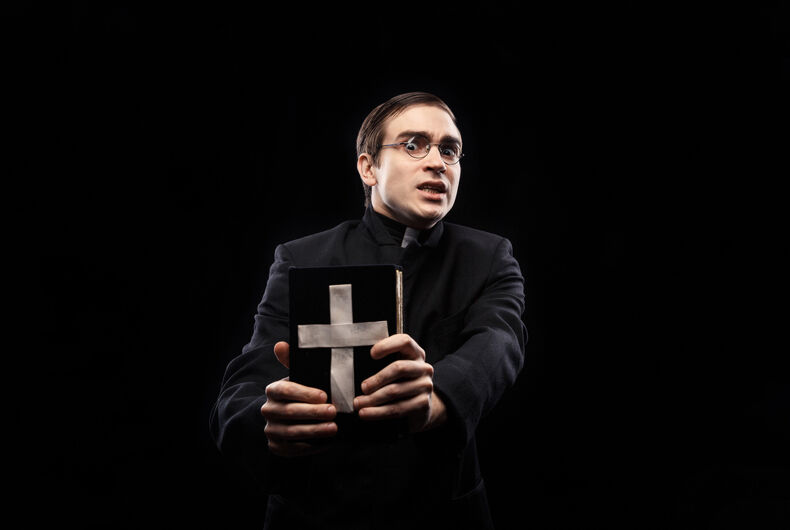 After Boise police arrested Father W. Thomas Faucher for child pornography and drug possession charges, the Catholic church quickly evicted the retired priest from his home of 15 years. Now they’re selling it – and it took some extreme measures to ensure a buyer.

The church sent a team of 10 exorcists to the house to get rid of any “demonic powers” that might be squatting on the premises.

“We bless houses all the time,” said Father John Worster, pastor at St. Mary’s Catholic Church, told the Idaho Statesman. “I had our diocesan exorcist and his prayer team come and pray over the house.”

“There’s no doubt this defendant has very sadistic and deviant sexual interests,” Deputy Prosecutor Kassandra Slaven said during a bond hearing for Faucher.

Authorities found thousands of “brutal rape and torture” photos and videos of infants in his possession. Others included the rape and killing of animals. They also found “countless” chat conversations he had where he expressed a desire to torture and kill young children.

Worster says the ultimate clean up project washed away the “spiritual filth” and landed them a sale.

“The market is so incredibly good right now. We’re getting everything we asked for and more,” he said. “It bid itself up a bit.”

“Our main goal is to turn the house over in good condition to the next owner,” he said. “We’re painting, cleaning up the floors and cleaning carpet, even as we speak. Part of that is taking care of the spiritual side of things.”
“We believe in demonic powers. We brought in the ghostbusters.”
News
Boise ID, Catholic Church, Catholic priests, exorcism, pedophile priests, Rev. W. Thomas Faucher