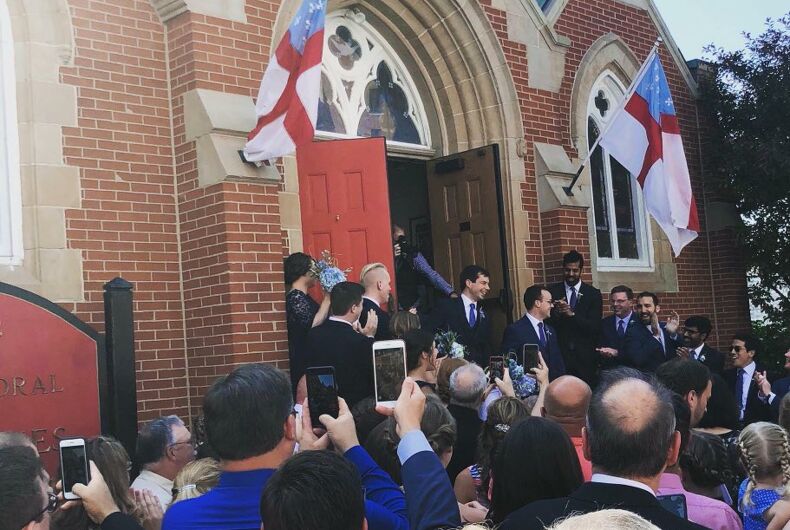 June is the time for wedding bells. It’s also the time for Pride Celebrations. What could be better than to combine both?

In a ceremony at the Cathedral of St. James, Buttigieg married Chasten Glezman, a junior high school teacher. Then the pair left to attend the South Bend Gay Pride Week block party, where the pair shared a kiss before the joyful crowd.

“It was a kind of magical moment,” Glezman recalled. “I mean, sure, it’s a fried ball of meat with an egg in the middle, but when it came to the table my little Midwestern heart leapt.”

Buttigieg said that at that moment, he knew the relationship “had a shot.”

If Buttigieg’s ambitions are any indication, South Bend won’t be the couple’s home forever. He already made a run to head the Democratic National Committee, and he’s attracting the kind of media coverage reserved for political stars. (The New York Times was there for the wedding and covered it at length.)

Obama advisor David Axelrod, who attended the wedding, has said that “Pete’s going to be a force in the Democratic Party. The question is just whether that’s as a candidate for president, or something else.”

But that’s down the line. After attending the block party, the couple went to their wedding reception, where they had their first dance as a married couple to “When You Say Nothing at All.” The food was decided informal–tacos and sliders–as was the entertainment.

Guests could play at one of two Skee Ball machines or with a crane game that allowed them to grab stuffed bears. Those are the grooms’ favorite games.

It is Indiana, after all.