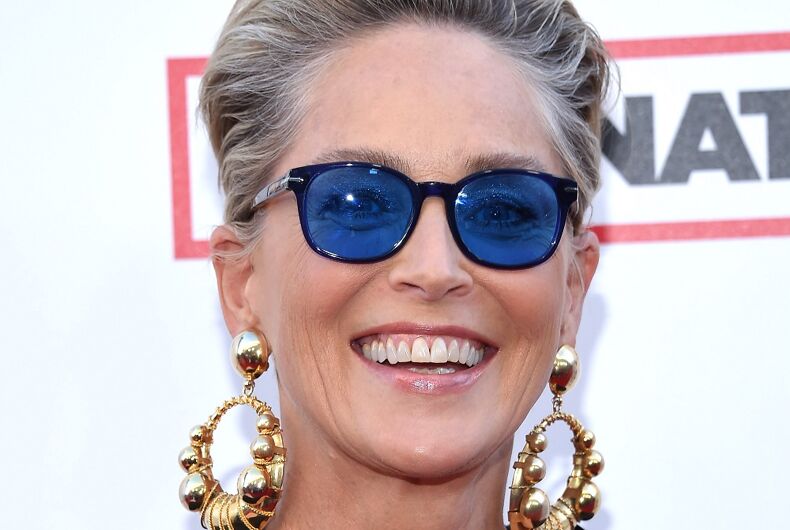 Debra Messing and Sharon Stone appeared on PBS’s Actors on Actors, a show where celebrities interview each other.

“And I said, of course, ‘Are you coming out? If you’re coming out, you should tell me first. You should talk to me first,'” Stone said, mimicking a very worried tone. “And he said, ‘Mom. I don’t know. It doesn’t matter. And anyway, that’s a war that’s already been fought.'”

Messing appeared flabbergasted by the story. “Mic drop, boom! That’s your son. He’s learned that from you.”

“And you,” Stone said. “I have to say, I appreciate the kind of work that you’re doing. It’s valuable.”

First, it’s obviously nice that the 11-year-old son of a very wealthy person is free enough in 2018 to ask for pink nail polish. That’s progress of a sort – Stone’s story 40 years ago would have ended with her sending him to therapy.

But regular readers of LGBTQ Nation know that the war has not “already been fought.” It’s far from over.

We publish several stories about anti-LGBTQ violence and discrimination every day. There are many more that come to the editors’ attention but that aren’t pursued for various reasons, often just because we don’t want this publication to become a list of all the bad things that happen in the world.

And then there are is an unknowable numbers of incidents of hate and discrimination that don’t come to our attention.

The U.S.A. – as well as the rest of the world – remains a place that is by and large intolerant of LGBTQ people.

We have made unimaginable progress in the last several decades, but there is still so much work to be done before a lesbian couple can feel safe holding hands anywhere in America, before transgender people can show up for job interviews without worrying about discrimination, before a bi teen in rural Indiana can sew a rainbow patch to his backpack without being called a faggot, before parents stop sending their queer kids to conversion therapy or kicking them to the street, or before politicians stop telling us to be more civil with those who hate us.

Stone’s son is 11-years-old and his ignorance of the world is easily forgiven. What Stone herself is trying to convey with the story, though, sounds less like a little family anecdote and more like a straight person who wants to pretend that homophobia and transphobia are over.

LGBTQ people don’t have the privilege of saying that the war has “already been fought” just because Will & Grace is in its ninth season.