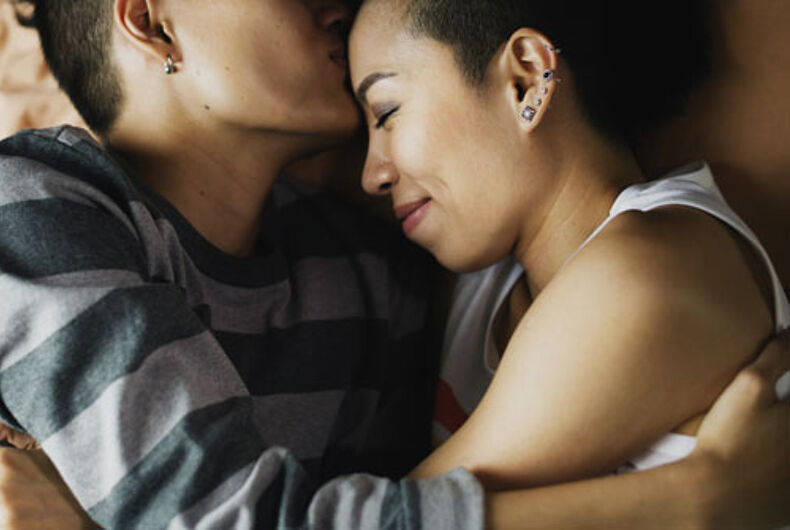 A romantic relationship can help lesbian and gay youth feel less mental anguish, according to a new study published in the Journal of Abnormal Psychology. This effect is even more pronounced in some people of color versus white people.

While in a relationship, lesbian and gay youth were found to be 17% less distressed than when they were not.

“The findings suggest there might be great value in initiatives that could help LGBT youth meet other youth such as citywide ‘queer proms,’ and engage in healthy learning about dating and romance,” said study lead, Sarah W. Whitton.

“Our romantic partner can be the first person you reach out to when you have good news to celebrate or for a shoulder to cry on when you have bad news. Having a partner then can amplify the good things in life and provide critical support during tough times,” added co-author Brian Mustanski, the director of the Institute for Sexual and Gender Minority Health and Wellbeing at Northwestern University Feinberg School of Medicine.

Northwestern Medicine conducted the study in collaboration with the University of Cincinnati.

Surprisingly, the same result is not replicated for heterosexuals, for whom romance may act more as a cause of trauma than a cure. What’s more, bisexual-identified youth feel 19% more distress while in relationships, in contrast to their lesbian and gay counterparts.

The study did not poll enough transgender or gender nonconforming people to make an accurate assessment.

The study focused on 240 racially diverse youth beginning when they were within the age range of 16-20. Most participants also identified at LGBTQ. Participants were then polled several times over the course of the next five years.

Contacting people over time allowed researchers to poll people both while they were in a romantic relationship and when they weren’t.

Within the scope of the study, romance was framed as being in an ongoing relationship with a lover, boyfriend, girlfriend, or someone else that participants felt very close to.

The differences across race and sexuality suggest that professionals should consider these differences when caring for patients as well as when conducting future studies.