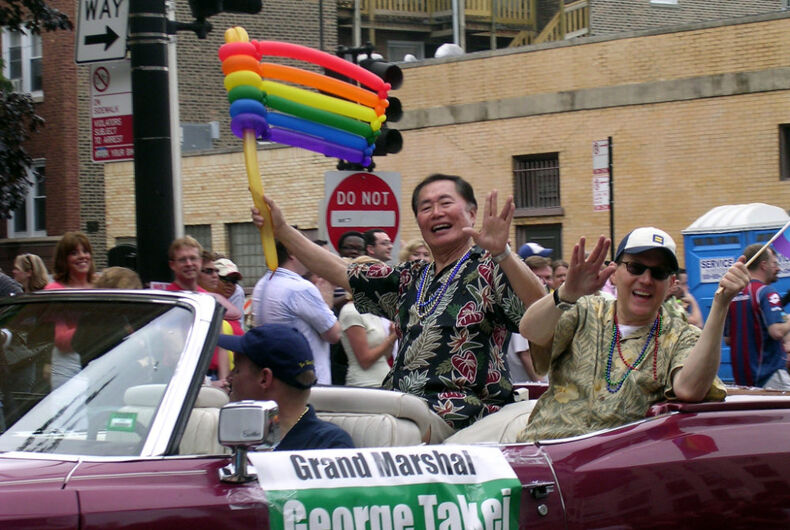 But George Takei, one of the nation’s most visible gay Americans of recent times, said it was more just a public acknowledgement than a coming out.

By the time of the 2005 announcement — and his appearance as grand marshal in the 2006 Chicago Pride Parade — Takei and his partner/now husband, Brad Altman Takei, had been together for two decades and out to family and friends, Takei said.

“The world has changed from when I was a young teen feeling ashamed for being gay,” he told the Associated Press. “The issue of gay marriage is now a political issue. That would have been unthinkable when I was young.”

Indeed it had changed — from when he and his family were shipped to a Japanese-American internment camp in World War II. From when he started his acting career in the late 1950s. From when he was cast as Lt. Hikaru Sulu on the 1965 pilot of Star Trek.

As an activist, commentator and critic, Takei has been prolific. His Facebook reflections drew millions of followers and legion of new fans. And in 2012, he starred in the Broadway musical Allegiance, a self-described legacy project based on his own experiences in the internment camp.

He has since refuted accusations of sexual impropriety. Yet, all the while, Takei and his husband have supported a range of causes, including LGBTQ-related efforts. His signature “Oh My” tagline has disarmed critics with good humor.

Free binders for trans people? This group is making it possible.