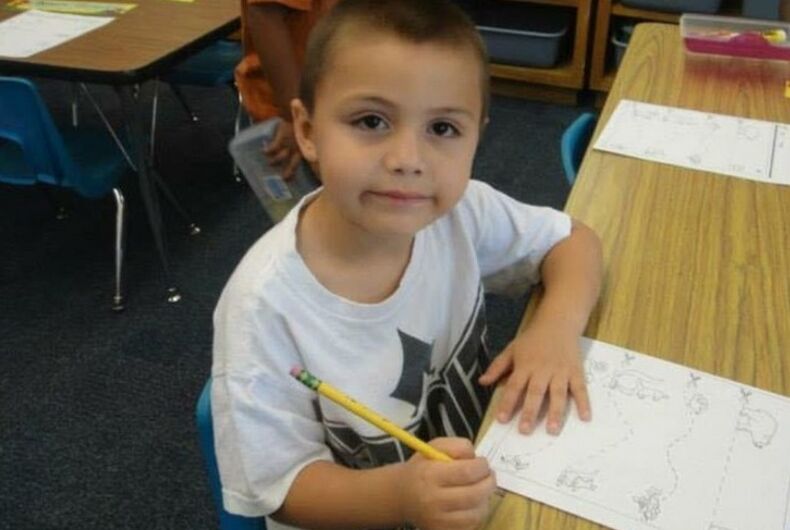 Update: Anthony’s mother’s boyfriend has been arrested on suspicion of murder.

Investigators said that a 10-year-old child who died recently after years of physical abuse may have come out as gay just before he was killed.

Last Wednesday, the Los Angeles County Sheriff’s Department responded to a 911 call at Anthony Avalos’s home and were told by his mother Heather Barron that the child had “suffered injuries from a fall.”

He had severe head injuries and cigarette burns on his body, and his mother and her boyfriend Kareem Leiva had been reported numerous times for child abuse.

Anthony was unresponsive and taken to the hospital, where he died a day later.

Since 2013, the Department of Children and Family Services (DCFS) and the police received 16 calls from school officials and family members concerning child abuse by Barron and Leiva. At least 13 of those calls, according to an anonymous source who spoke with the LA Times, were about Anthony specifically, not one of his six siblings.

A 2013 investigation also concluded that Anthony was sexually abused by a grandparent.

DCFS Director Bobby Cagle said that the reports included accusations that Anthony and his siblings were denied food and water, sexually abused, beaten, dangled upside-down from a staircase, forced to crouch for hours, locked in a small room without a bathroom, forced to fight, and told to eat from the trash.

Now DCFS Deputy Director Brandon Nichols said that Anthony “said he liked boys” in the weeks leading to his death.

Nichols did not provide any more details, but a DCFS statement said that they are investigating if “homophobia is a factor.”

Anthony’s aunt Maria Barron, who said that she started calling DCFS in 2015 when she noticed bruises on the kids, said that if he came out that “only reinforces how brave Anthony was,” considering the conditions in which he lived.

The death, which followed years of reported abuse, has led to an internal investigation at DCFS.

LA County Supervisor Janice Hahn said, “We failed Anthony. I hope to get answers in the coming days as to what went wrong.”

Cagle, though, said that it’s “premature” to say whether or not DCFS failed in this situation.

“That’s a very complex question. It’s much more than a black-and-white issue. There are many shades of gray,” he said.

After a juvenile court hearing on Tuesday, Maria Barron sounded disappointed that Heather Barron and Leiva have not yet been arrested.

If Barron and Leiva abused Anthony because he was gay, this would not be the first such case in Los Angeles. In 2013, 8-year-old Gabriel Fernandez was abused by his parents until he died because they thought he was gay.

The Supreme Court cares about religious animus. Except when it doesn’t.