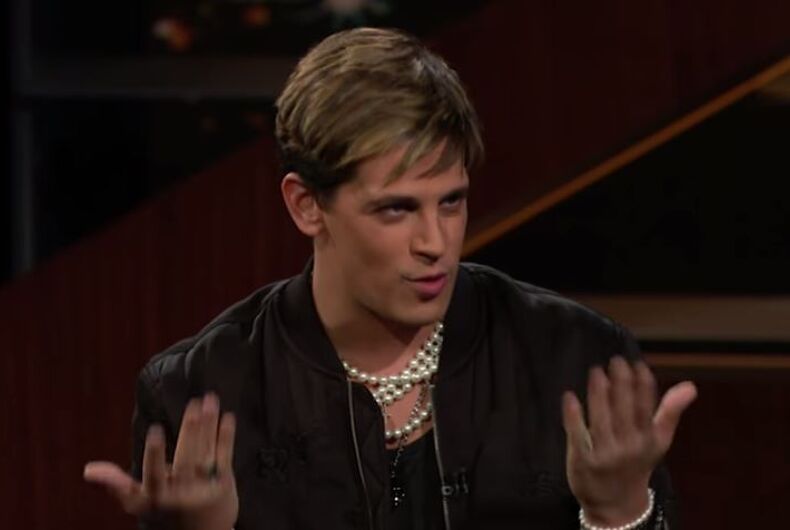 The right-wing trolls have been out in force since six Annapolis, Maryland, journalists were gunned down in their newsroom Thursday.

Meanwhile, their slimy, self-anointed king — Milo Yiannopoulos — is reveling in his return to neocon glory, even as he backpedals with a dash of bigotry.

Related: Milo got chased out of a bar after people chanted ‘Nazi scum get out’ until he left

In one of the deadliest attacks on journalists in U.S. history, a white male identified as an aggrieved reader of the Capital Gazette newspaper, has been charged with opening fire in the newsroom on Thursday. Five employees were killed and two injured. Among the dead is Rob Hiaasen, 59, columnist and editor, the brother of best-selling author and journalist Carl Hiaasen.

Yiannopoulos has no apparent ties to the Capital Gazette. But, two days before the Annapolis murders, in a text-message response to Observer reporter Davis Richardson, he had issued a chilling message:

“I can’t wait for the vigilante squads to start gunning journalists down on sight.”

That reply, to a question on an Observer story about a New York restaurant he is said to patronize, matches similar messages he’s shared in other forums. This time, though, it has reverberated in the post-massacre echo chamber.

As he does, Yiannopoulos dialed it back just a little. His Facebook follow-up added a dash of anti-trans bigotry —

“Let’s hope it’s another transgender shooter, too, so the casualties are minimal.” He was referring to Nasim Najafi Aghdam, the YouTube shooter. An internet conspiracy theory claimed that she was transgender, even though there was no evidence that she was.

The messages have now catapulted Yiannopoulos’ notoriety across the Annapolis coverage.

The provocateur rose to fame at Breitbart, fell from grace as his ties white nationalists were exposed and lost a book deal and an invitation to speak at the Conservative Political Action Conference after comments that appeared to condone relationships between men and boys. He’s bounced across the college-speaking circuit on his “Dangerous Faggot” tour, making news with speaking invitations and dis-invitations.

Now he’s forever linked to coverage of a mass murder.