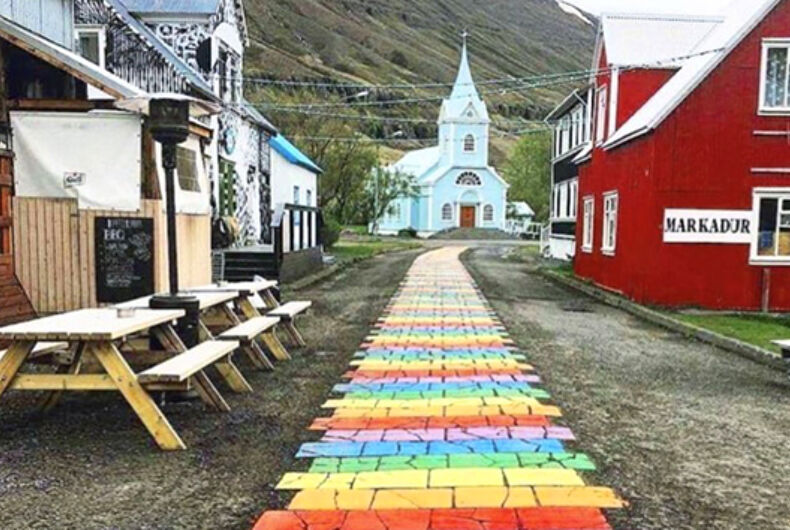 Seyðisfjörður, a picturesque town in Iceland has created what may well be the most adorable rainbow path to show its support for its LGBTQ residents.

The brick path was painted down the center of the main street through town, with both residents and local businesses taking part in painting the road in rainbow colors.

Reykjavík, the capital of Iceland, hosts an annual pride celebration of its own, which usually attracts over 100,000 people — roughly a third the population of the entire country. It is one of the largest events in Iceland, one that organizers call “the biggest small pride” worldwide.

Reykjavík also has a tradition of painting landmarks in the city in rainbow hues, but even they can’t hold a candle to Seyðisfjörður’s lovely brick walkway.

The town is 255 miles away from Reykjavik and inhabited by only 700 people. Even though Iceland itself is very LGBTQ-friendly, this small village may hardly be the first place one might think to find such a colorful path or such a supportive community.

While a small town, Seyðisfjörður has held its own pride event since 2014, when local resident Snorri Emilsson was unable to trek to the capital, and hosted his own informal pride party with six others instead.

After posting photos to his Facebook account, friends of his asked why he didn’t promote his pride event before hand, so the next year, he decided to make it a “real” pride event. That was the birth of Queer Parade Seyðisfjörður.

Hundreds more are expected to attend this year, when their Pride event is held on the 12th of August. This event will, of course, march down their rainbow path, culminating in celebrations at Kaffi Lára, the bar where the local event originated.

Today, I went to Seyđisfjördđur. What an amazing discovery it was ! It's a lovely town with many colourful houses (red,yellow, blue, green…). 🌈The church and its little colorful path are my firms favourites. The architecture of this church is very typical of Iceland ⛪. It is a little place of happiness lost between two mountains ⛰ 🤗 #pathway

Did a jury give a gay man the death penalty because prison would be ‘too much fun?’