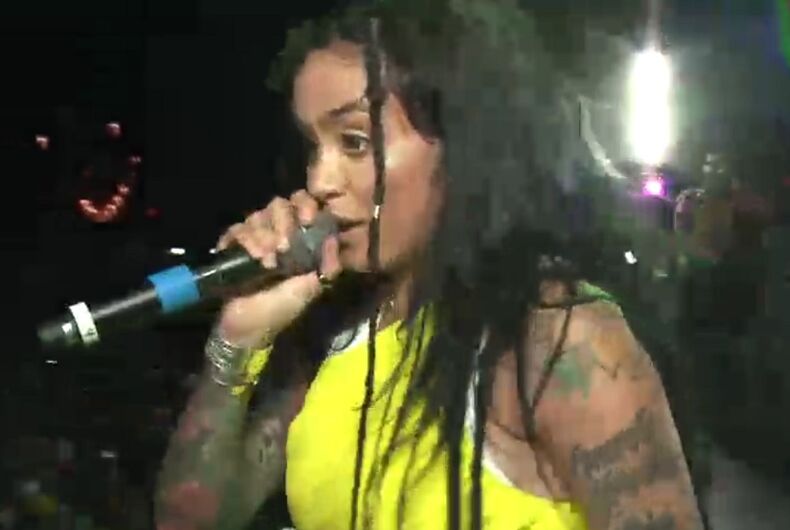 Many people who had bought tickets to Los Angeles’s pride festival were sent home disappointed when they found the event was overbooked.

The LA Blade reports that the Fire Marshal said that LA Pride was overcapacity at 10 p.m. last night, the day that out musician Kehlani was performing. The West Hollywood Sheriff’s Office started telling people to go home.

Organizers started turning people away, including people who had prepaid tickets. Lines to get into the event were over a block long.

“I’m just going home. I had fun in line but the line was my Pride this year, I guess,” said pride-goer Lauren Drake.

#lapride you guys created an extremely dangerous environment. Besides paying for bracelets at the table and seconds later be denied entry at the metal detectors (due to “over capacity”), you mfs did not protect anyone from the treatment ppl recieved outside of these gates.

In order to disperse the crowds, police helicopters arrived and told people to go home.

“The fire marshals kept saying, ‘no matter how long you wait, you’re not getting in, you’re not getting in,’ to the people that were waiting in line,” said Jimmy Palmieri, the founder of the sober carnival section of the festival. “We packed early and we left because we knew this was going to happen, once we heard the choppers yelling. It was really crowded, but honestly, it didn’t seem like trouble to me. I think the cops were not letting people in no matter what, even if they had tickets.”

“What were they expecting, Stonewall?” Jerwyn Morton, a pride-goer who flew in from New York, told the LA Blade. “I have never seen so many cops in my life wearing riot gear at a gay event.”

“It was disconcerting hearing the helicopters fly over the city yelling into megaphones, telling people to go home on Pride night,” said West Hollywood resident Dan Mryglot. “It really made me uneasy.”

The WeHo Times captured video of the police helicopters and posted it to YouTube.

LA Pride was held in a smaller venue as part of West Hollywood Park was unavailable for the event. The free Friday night party, which is the only part of the festival that some people attend, wasn’t held this year.

So not only was the festival more limited in space and time than it previously was, it experienced record ticket sales, especially for the day that Kehlani was to perform.

She tweeted that people deserved refunds, and also empathized with her disappointed fans.

i’m seeing all your tweets and messages. i’m sorry LA Pride reached their full capacity and aren’t letting any more people in. y’all deserve refunds and i hope we get a chance to jam soon 💔

as fun as that was my heart goes out to all the folks who drove, flew, train & bussed here and weren’t allowed in. my heart is wit those who had scary run ins with the LAPD & bad security tonight. we gotta do better.

Journalist Gerrick Kennedy tweeted that he has heard that Kehlani fans were the driving force behind the record ticket sales.

This year’s @lapride tripled the sales of last year. 30,000 guests. This space has never felt big enough for three stages. Organizers must consider a relocation as this year’s festival is TIGHT to move around.

Shout out to @Kehlani fans. Sources tell me she’s a driving force behind this year’s ticket sales which led to a record breaking attendance for Saturday @lapride 🌈🌈🌈🌈🌈🌈

LA Pride said that anyone who wasn’t able to use their ticket will be able to use it on Sunday.

And posted video of Kehlani’s performance.

Will Saudia Arabia’s ‘liberalization’ ever include LGBT people?