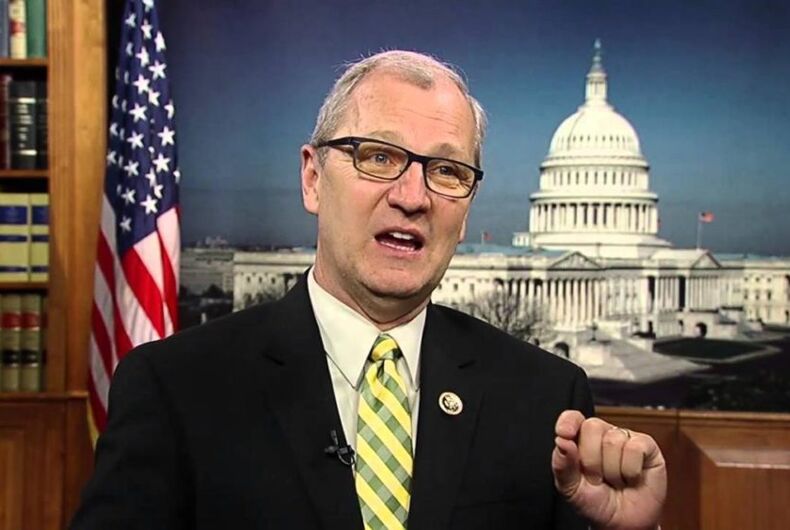 The Republican party’s march toward Trumpism has led it to the fringes of anti-LGBTQ extremism.

The latest example comes from two of the party’s nominees for Senate, Corey Stewart in Virginia and Kevin Cramer in North Dakota. Both Stewart and Cramer, who won their primaries this week, sought the support of a viciously homophobic group, Public Advocate of the United States.

Each candidate filled out a survey for Public Advocate in hopes of gaining the group’s support. The survey consists of eight questions with a vehmently anti-LGBTQ slant.

For example, does the candidate “oppose all efforts to make public restrooms and changing-rooms unsafe through so-called ‘Transgender Bathrooms’ legislation and regulations – which have the effect of encouraging and protecting pedophiles.”

The survey also asks if the candidate agrees that public schools should be “prevented from brainwashing elementary school children with the Homosexual Agenda – such as California’s current policy speculating widely about the sexual activity of past presidents and figures?”

Public Advocate is the pet project of Eugene Delgaudio, who has a decades-long history of attacking LGBTQ rights in the most offensive terms possible, regularly equating homosexuality with pedophilia.

He has said that gay rights will make it legal “to rape and murder young boys.”  He said that marriage equality will lead to “men hand-in-hand skipping down to adoption centers to ‘pick out’ a little boy for themselves.”

There’s also the occasional WTF outburst, such as Delgaudio’s insistence that TSA screening requirements mean “the next TSA official that gives you an ‘enhanced pat down’ could be a practicing homosexual secretly getting pleasure from your submission.” It’s no wonder that the Southern Poverty Law Center has designated Public Advocate a hate group.

Stewart has stood up for white supremacists and has said that teaching kids LGBTQ history in school meant that “sodomy is now a mandatory course.” Cramer has wondered aloud whether anti-LGBTQ workplace discrimination even exists.

Public Advocate laughingly proclaims that it does not endorse candidates. However, the group is running ads in support of Cramer, and Delgaudio has publicly supported Stewart’s campaign.

While Stewart’s odds against incumbent Tim Kaine are long, Republicans in North Dakota have been counting on defeating Democratic incumbent Heidi Heitkamp. If they succeed in electing Cramer, they will continue the mainstreaming of hate as a core tenet of the party.

He killed his friend to prove he was ‘straighter.’ Now he’s going straight to prison.

Pride in Pictures 2001: Sisters in Pride