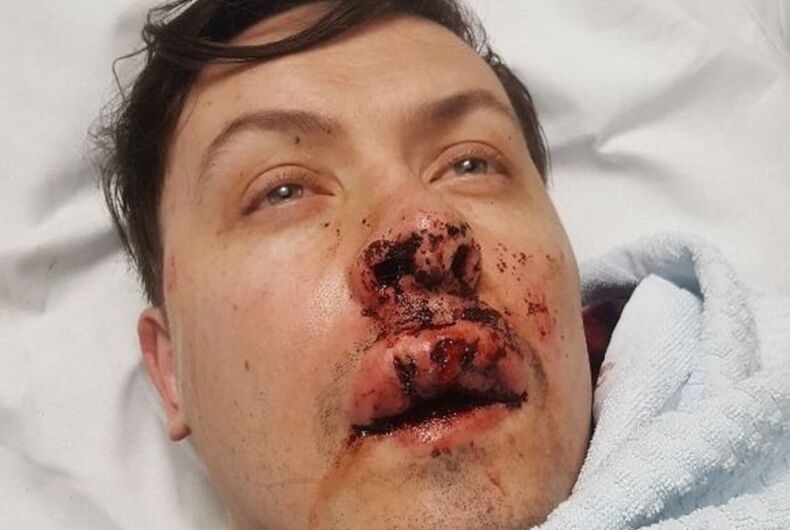 A gay couple has turned to GoFundMe to get money needed for surgery after they were, allegedly, the victims of an unprovoked attack.

Collie McQuillan, 30, and his husband Gui, 24, were taken to the hospital after they were attacked by a group of four young men carrying hurls and wood in Portlaoise in central Ireland. A hurl is a wooden instrument used in an Irish sport called hurling that looks like a hockey stick.

“The attack was mindless and totally unprovoked,” Collie said. He told the Irish Times that he got injured trying to protect his husband.

Collie, whose injuries were more severe, had to be transferred to a hospital in Dublin for treatment. Now he has turned to GoFundMe to help pay for reconstructive surgery.

He wrote that both his upper and lower jaws were broken. He lost or broke four teeth and needs root canals on several others due to nerve damage.

But the injuries weren’t just physical. “With the physical pain, came the depression,” Gui wrote on Facebook.

The couple believes that the attack was motivated by homophobia.

“We still can’t believe that this happened, what kind of people do that?” Gui wrote. “We just don’t understand.”

Police confirmed they are investigating the attack, which resulted in “serious facial injuries” for one of the victims. They said that it is not currently being investigated as a hate crime.

No arrests have been made, and police are asking that anyone with information about the attack call 057-8674100.

It never comes to your mind that this could happen to you or to someone close, till it does.My husband and I were…

Milo said he wants to see journalists murdered. Then someone did just that.