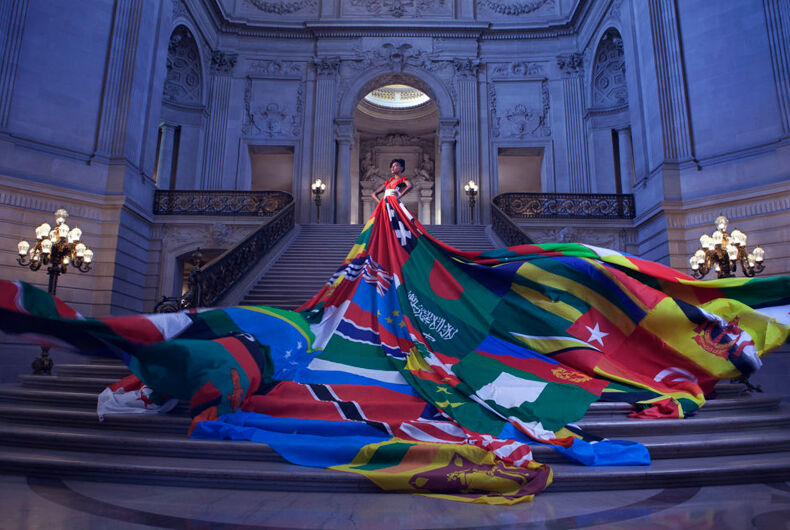 Pride may be known, in part, for amazing outfits, but it is hard to top the Amsterdam Rainbow Dress which can be seen in San Francisco during this year’s Pride weekend.

The dress is more of an artists’ statement than a frock, crafted out of more than 70 nation flags from around the world. Each one represents a country that has anti LGBTQ legislation on the books.

As countries remove these laws, their flag is replaced with a rainbow flag. So far, only one such glad has been replaced: that of Belize. Belize decriminalized homosexuality in August of 2016, prompting its removal from the garment.

The hope, of course, is to see the dress transform into a single, rainbow-colored garment.

The bodice of the dress is created out of the flag for the city of Amsterdam. Far from being critical of the city, it symbolizes the city’s role in the first same-sex marriage in 2001.

The dress was the brainchild of Arnout van Krimpen, Jochem Kaan, Oeri van Woezik, and Mattijs van Bergen, with support of the Amsterdam Museum and volunteers from COC Nederland, a Dutch LGBTQ rights advocacy group.

SF Pride, in cooperation with the Netherlands Consulate General, have brought the dress to San Francisco this season, and will be displaying it at Salesforce headquarters on the 22nd of June as well as San Francisco City Hall during a VIP pride party on the 24th.

The dress is currently on tour, with stops at Madrid Pride, Seoul Pride, Stockholm Europride, and a trek to South Africa towards the end of 2018. The Amsterdam Rainbow Dress Foundation hopes to continue to send the dress around the world, photographing the garment in conjunction with local artists.

A full list of the flags on the dress can be found on the Amsterdam Rainbow Dress Foundation’s website.

Pride in Pictures 2008: The Pride flag is now our icon

Cher & Meryl Streep saved a woman who was being sexually assaulted