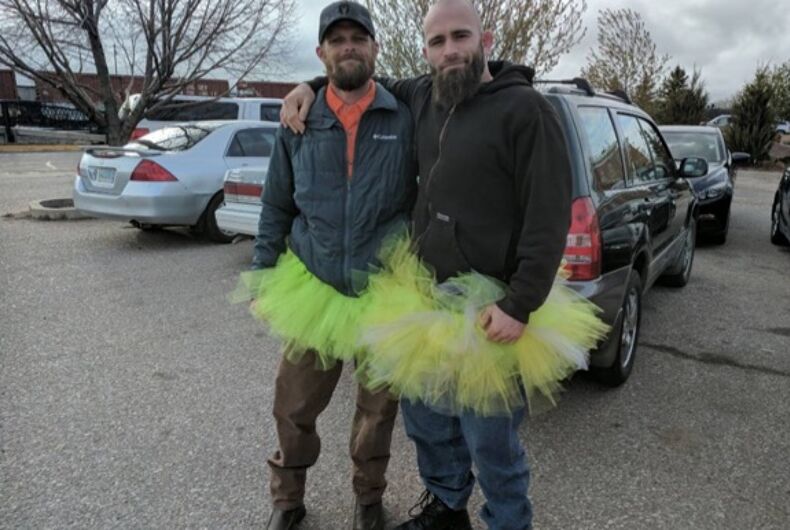 Two men wear tutus to stand up for equality and diversity in Wyoming.Photo: Instagram/tadousay

If there’s anything good about living in the Trump era, it’s that the absurdity of the Orange One’s ascendancy to the oval office has inspired some of the most creative protests we’ve seen in a while.

Donald Trump may bring out the worst in his supporters, but his presidency has inspired opponents of his far-right agenda to express their resistance in some provocative and often hilarious ways.

Here are some of the most creative protests we’ve seen thus far under the Trump regime.

In the wake of the mass shooting at their school, students of Parkland’s Stoneman Douglas high school have proven some of the savviest protestors of the Trump era.

In response to Trump’s anti-immigration comments about “shithole countries,” the word “shithole” was projected onto the entrance of Trump International Hotel in Washington, DC.

Hodgeman wanted to ask a question: What is DeVos doing to ensure schools are safe learning environments for LGBT students and others who are questioning their gender identity? Since they didn’t get to pose that question, Hodgeman quietly trolled DeVos by wearing a homemade Transgender Pride cape.

In March, activists placed 7,000 pairs of shoes on the lawn outside the Capitol in Washington, DC, to push Congress on gun control. The demonstration was based on American Academy of Pediatrics research which found that 1,300 children die annually from gunshot wounds in the U.S.

Right now at the US capitol. #NotOneMore #NeverAgain pic.twitter.com/lUEGRg2VO5

Who says protests can’t be fun? Just in time for Trump’s inauguration, an activist group known as the DC Welcoming Committee planned a queer dance party outside the home of then-vice-president-elect Mike Pence, to protest Pence’s well-known anti-LGBTQ sentiments.

On April 1, 2017, activist group WERK for Peace combined partying with protesting by staging a queer dance party in Ivanka Trump’s neighborhood, to oppose Trump’s Executive Order rolling back environmental regulations and slashing funding to the EPA.

Days after Trump’s inauguration, Greenpeace activists deployed a 70-foot by 35-foot banner of the word “Resist” above the White House.

On October 6, 2017, Robby Diesu directed a trailer to a spot near the Washington Monument, with a good sightline to the White House. He and his crew set up a 160-square-foot video screen, hooked it up to a laptop and pressed play. For the next 12 hours, the infamous tape of Trump’s “grab ’em by the pussy” hot mic remarks from “Access Hollywood” played on a constant loop.

Supporters of LGBTQ equality wore tutus in Wyoming wore tutus in protest of Sen. Mike Enzi’s comment that men who wear tutus into bars are asking to be assaulted. Straight men all over the state are going to be joining their LGBTQ siblings and wearing tutu’s, buying their queer friends drinks and having a great time,” Equality Wyoming’s Sara Burlingame wrote.

I love these men 😄😍 #liveandlettutu

When the Republican National Convention came to Cleveland, Ohio to nominate Donald Trump, advertising partners Tommy Noonan and Douglas Cameron created the Trump Hut to shed light on the issue of income inequality, which they believed would grow if he was elected. The Trump hut is a structure based on the then-presumptive nominee’s iconic hair.

Students and faculty at Carnegie Mellon University in Pittsburgh were not having it when Westboro Baptist Church announced a protest at their school. They brought out bagpipes to drown out the protestors and drove them off the campus.

Is Franklin Graham positioning himself to run for President?